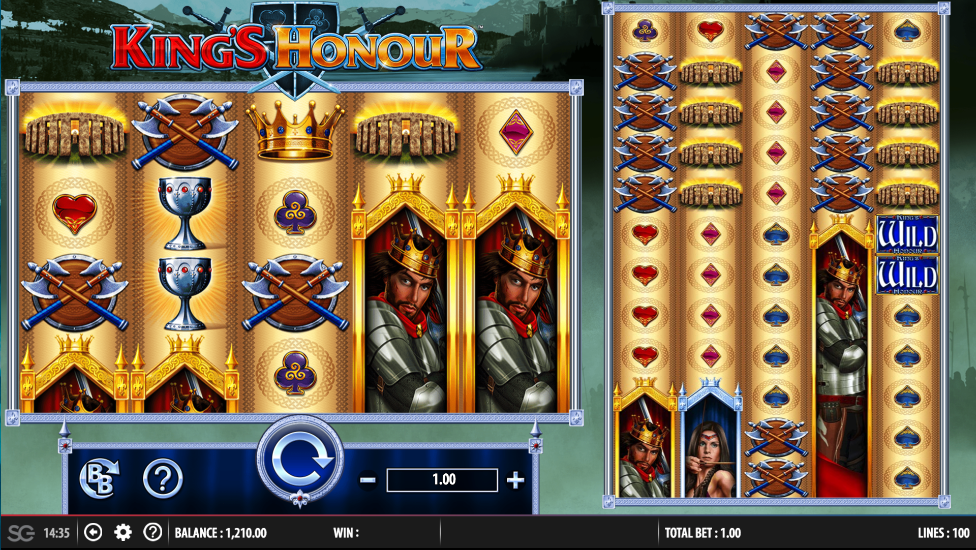 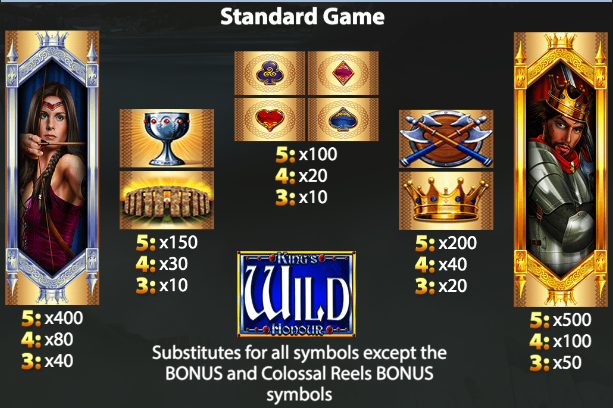 Online slot machines weren’t that popular six hundred years ago but the various characters of that era would have been delighted to find out that they form the theme to many modern games; here’s one more – it’s called King’s Honour, it’s developed by Barcrest and it comes with numerous bonus features plus the popular Big Bet option.

King’s Honour is a five reel slot with four rows on the left set, twelve on the right and a total of one hundred fixed paylines; the reels operate independently of each other except that when a stack of four wild symbols lands on the left set, they’ll also fill up the corresponding reel on the right. In addition the bonus can be triggered with symbols on both reel sets.

The high value symbols include the king and the archer (both can be stacked), the silver cup, Stonehenge, the axes and the golden crown; playing card symbols in red and blue represent the lower values.

The wild is a big ‘Wild’ which will replace all others to help make winning combos except for the sword-in-the-stone bonus symbol.

This is triggered by landing at least three of the bonus symbols anywhere on reels one, three and five on either reel; as you can see from the lengthy video above you’ll now get to spin a wheel which will determine the number of free spins awarded or the gold (500x), silver (150X) or bronze (50x) bet multipliers.

When the spins are underway you may be lucky enough to land the shield bonus symbol which will prompt you to pick from five shields for one of the following extra features:

The bonus can be triggered again during this feature.

This is an optional purchase of five spins with the following added features:

This occurs randomly in the base game and you will see random symbols transformed into matching ones for a guaranteed win.

This can occur in the base game if:

King’s Honour is a slot which certainly crams plenty of features into its dual, medieval reels and it’s all the better for that; the Colossal Reel on the right is not a new invention but it still works well. The advice here is always to go for the Big Bet option as the RTP increases from 94.00% – 97.75% when you do.