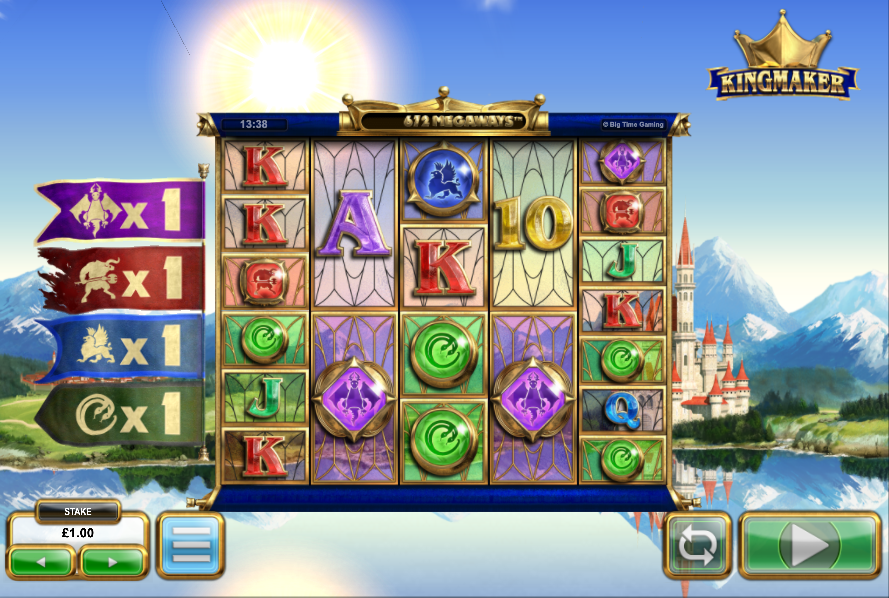 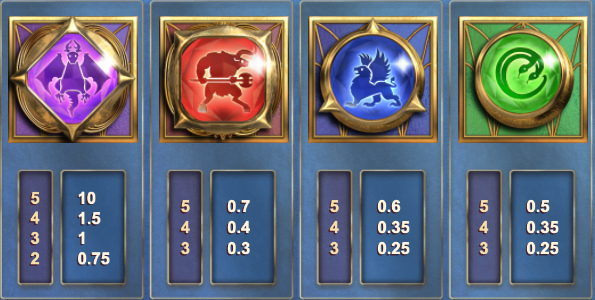 There’s a mediaeval vibe to this online slot machine from Big Time Gaming which comes with the title of Kingmaker; it offers players BTG’s clever Megaways payline structure along with free spins and gem multipliers and you can find out how it all works right here.

Kingmaker is a five reel slot with up to seven rows and this means there’s a potential 16,807 ways to win on each spin; those reels float above a placid lake behind which is a well looked after castle and a range of snow-capped mountains. To the left are the four banners which indicate the multiplier values (which we’ll explain shortly).

The higher value symbols are mythical animals such as the dragon, the minotaur, the griffin and the two-headed snake; 9, 10, J, Q, K and A represent the lower values.

The wild is a golden ‘Wild’ on  a coloured, stained glass background, it appears on reels two to five and it will substitute for all standard symbols; the golden crown is the scatter symbol.

The gem multipliers shown to the left of the reels are incremented each time you land a five of a kind win of that particular symbol; these multipliers remain in force until the free spins are activated, at which point they reset back to 1x.

Landing three, four or five of the golden crown scatter symbols anywhere in view will award 7, 12 or 20 free spins respectively; the multiplier in this round is the total from the base game so it always starts with at least 4x but each five of a kind win will increase it by 1x.

Three, four or five scatters landing during this feature will award 7, 12 or 20 extra spins.

Kingmaker brings a touch of sunshine to what was probably a miserable experience in the middle ages and it does so with a multiplier feature which makes longevity a reason to play this game; chuck in some free spins with that linked multiplier and you’ve got yourself a winner.