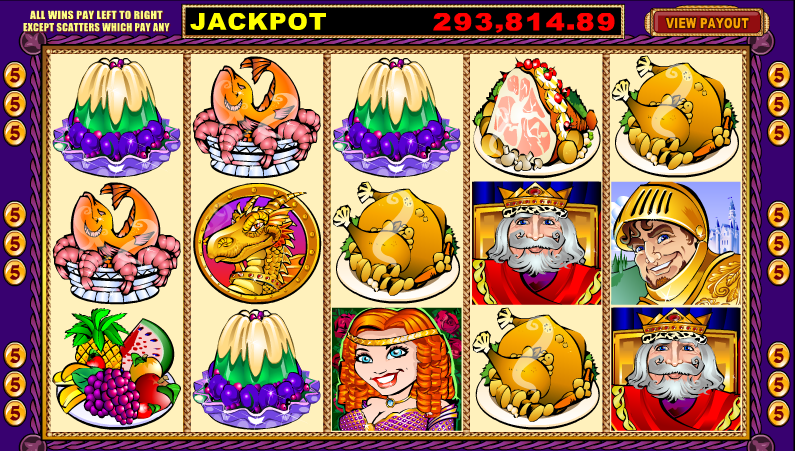 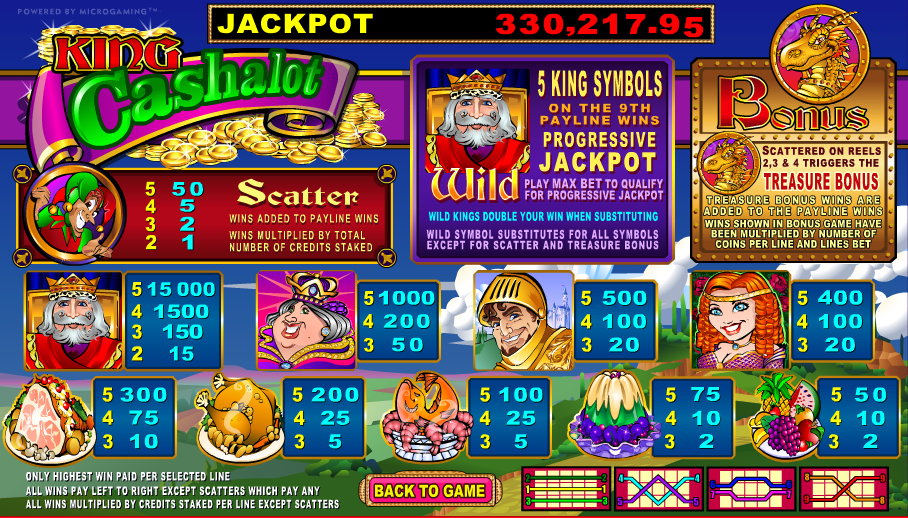 We’ve played plenty of online slots based in the middle ages before, not least a number based on the legend of King Arthur and Camelot. Microgaming’s King Cashalot is a little different in that it takes humorous look at what was, in retrospect, a dangerous and unpleasant time to live. Smiling characters are the name of the game here but there’s also a progressive jackpot to keep us all interested.

King Cashalot is a five reel and nine payline slot which is designed in a bright and colourful manner and it certainly makes medieval life look more rosy than it actually was. At least there’s no morris dancing.

The lower value symbols are all ingredients from a feast and include piles of fruit, some sort of dessert, fish, chicken and beef. There are then four chirpy characters who we’ll call the King, Queen, Prince and Princess. The King is also the wild, the court jester is the scatter symbol and there’s also a golden dragon bonus which activates the feature.

Let’s kick off by talking about the big bucks and you will see the progressive jackpot total slowly increasing above the reels. There’s only one way to win it and that’s to land five of the King wild symbols on payline nine. Check the payline info to see which one that is exactly but it runs from the bottom positions on reels one and two, through the centre spot on the middle reel and to the top spots on reels four and five.

You will need to land three of the golden dragon bonus symbols scattered on reels two, three and four to trigger this feature. Your task is to make one pick from the eight treasure chests displayed and then decide if you want to keep that prize. If you don’t want it you will get two more picks but you’ll have to keep the final one.

If you’re here for the progressive jackpot then make sure you have all nine paylines selected because you won’t be able to win it with any less.

This would probably be a largely run-of-the-mill slot if it weren’t for the jackpot prize which always adds an extra element of fun to any game. Give it a go.