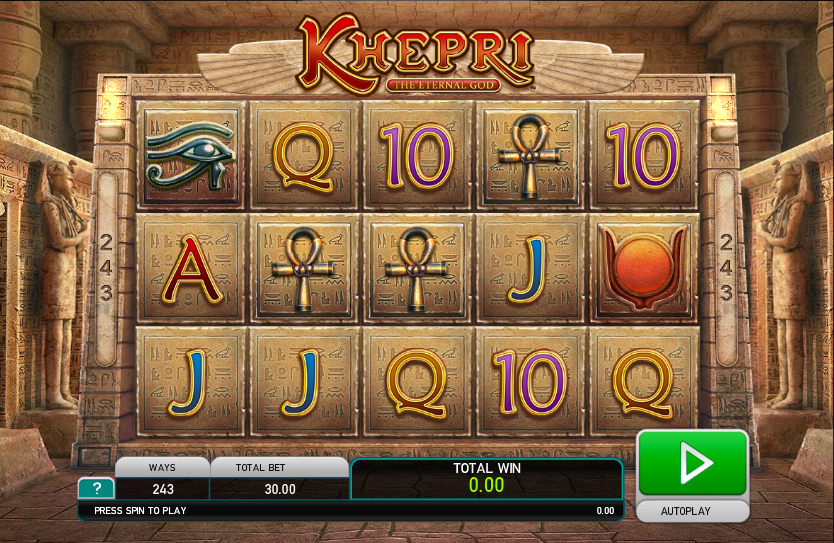 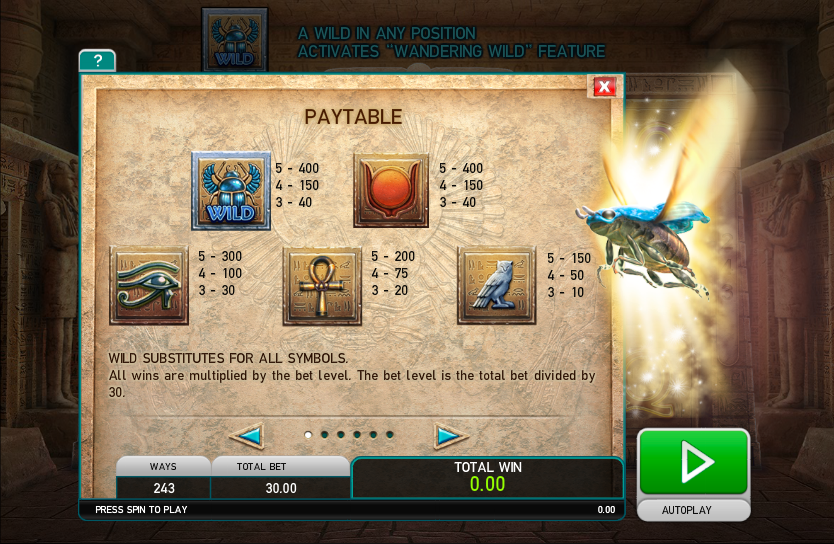 A return to Ancient Egypt is always just around the corner if you’re a fan of online slots and you’ll be heartened to know that three is now one more available to play – it’s called Khepri: The Eternal God and it’s developed by Leander Games. Khepri was a solar deity for the Egyptians and associated with the scarab beetle that we see so often in other similarly-themed slots.

Khepri: The Eternal God is a five reel slot with three rows and 243 ways to win; the standard payline structure is replaced by a system in which all you need to do is land matching symbols in adjacent reels starting from the left hand side.

The reel positions are formed from stone blocks covered with hieroglyphics and the whole thing is set inside a large temple with even more hieroglyphics decorating every surface.

The high value symbols are a familiar bunch of Egyptian symbols including the Eye of Horus, an ankh and an owl; lower values are the standard 10, J, Q, K and A.

The wild symbol is the scarab beetle, Khepri’s favourite creature and the key to the bonus feature.

This is the game’s only extra feature and it all takes place within the base game. Every time you land one or more of the wild scarab beetles you will receive one free respin and the wild will move to an adjacent position to help with wins.

If it move off the reels the feature is over but otherwise the round continues as the wild moves around the screen with each respin. More than one wild beetle can trigger this feature and if they happen to move to the same position you will receive a 2x multiplier for any wins on that spin. Three wilds on the same position will earn a 3x multiplier.

Khepri: The Eternal God is a good-looking game with a bonus feature that is easily triggered and quite lucrative. It’s a decent addition to the ranks of Egyptian slots with an RTP of 94.95%.