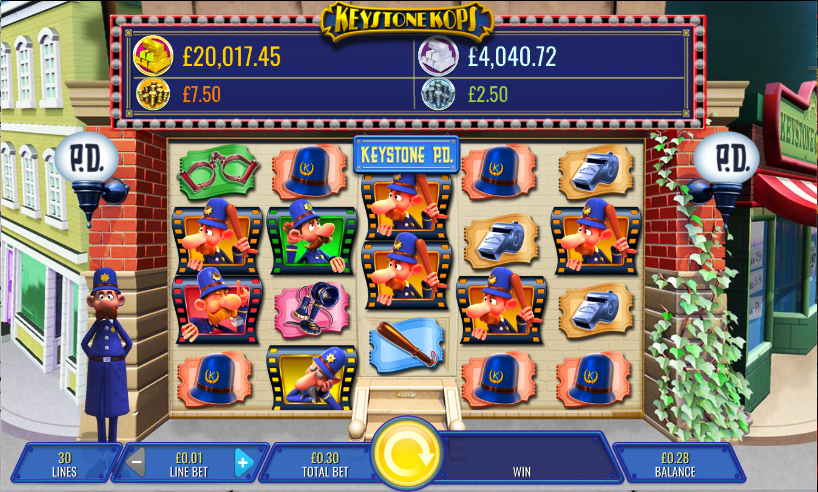 If you’ve got a crime to report then it’s probably best not to call the Keystone Kops – they’re the famously incompetent bunch of coppers who were more of a danger to themselves than any criminal; still, they make a good theme for an online slot and so here we have this game from IGT with a flurry of features and a progressive jackpot.

Keystone Kops is a five reel slot with four rows and twenty eight fixed paylines; the entrance to a police station is where those reels are spinning while at the top there are the four progressive jackpot values.

All the symbols are theme-related and include four of the Kops, a police helmet, a telephone, handcuffs, truncheon and a whistle.

The there’s a multicolour ‘Wild’ which will substitute for all others to help form winning combos except for the various symbols – the Keystone Kops logo, the Pilfering Pooch, the Pie Patrol and the safe.

This is triggered by landing a stack of any of the Kops or the wild symbol on reel three in the base game; that stack will now move to different positions on the reels and any of the other Kops or scatters in view will transform into that symbol. The lower value symbols may also transform.

The following mini-features may be awarded at random:

This is triggered by landing two Keystone Kops scatters on reels two and three and the safe on reel four; now just pick safes to collect three matching piles of ingots or coins to win one of the jackpot values.

Trigger this by landing two Keystone Kops scatters on reels two and three and the Pilfering Pooch symbol on reel four; you’ll now receive eight free spins and whenever a bone symbol lands it will cause a Kop to move around the reels, transforming up to 21 positions into wilds.

If nothing else, Keystone Kops offers players a vast number and range of bonus features but it’s more than that – it’s has cartoonish, 3D graphics, a jaunty soundtrack and of course that progressive jackpot to tempt us.