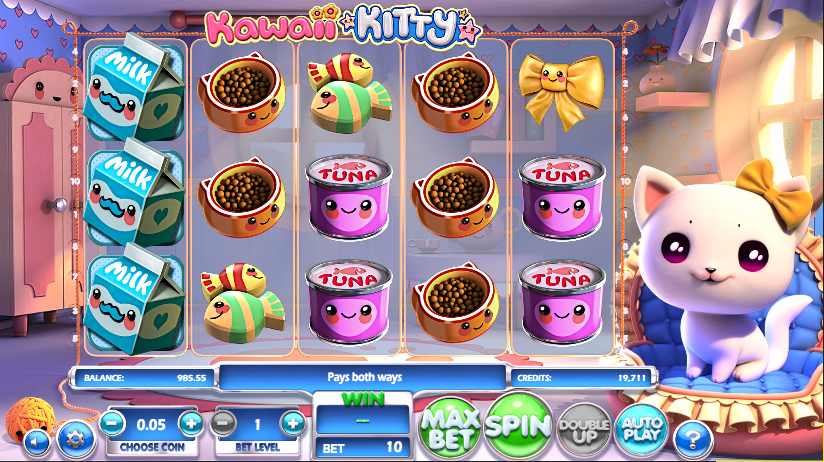 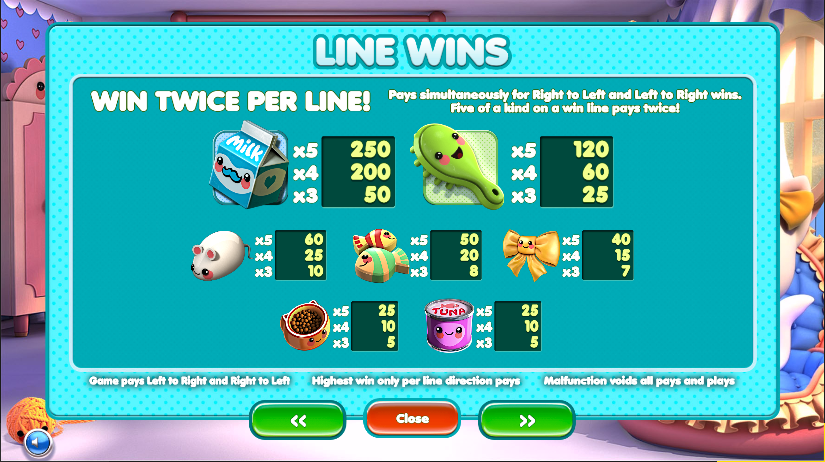 Over the years we’ve reviewed a number of online slots which can claim an almost unhealthy level of cuteness and now we have one more worthy addition to the rans of this genre; it’s called Kawaii Kitty and it’s developed by Betsoft Gaming. The word ‘Kawaii’ refers to cuteness in Japanese culture and you find out all about this game below.

Kawaii Kitty is a five reel slot with three rows and ten fixed paylines; the reels look ornate and very delicate and all the action takes place in the bedroom of a small girl, adorned with various cute items and decorations. The little cat itself sits on the right of the reels, occasionally moving around and sitting down again.

All the symbols are related to the theme and include a carton of milk, a hairbrush, a mouse, some fish, a bowtie, a bowl of cat food and a tin of tuna; winning combos can be formed from the right hand side as well as the left hand side.

The ball of wool is the wild symbol, it replaces all other to form winning combos and it also is integral to the main feature, explained in more detail below.

The ball of wool (yarn) appears only on reels two, three and four but when it lands there it will expand to fill all positions on that reel; after any wins are paid the wilds will remain in place for one more free respin to help you land more wins.

Kawaii Kitty is a relatively simple slot compared to some of Betsoft’s more in depth games but it’s very good nonetheless with an integrated base game bonus feature which is regularly triggered. Well worth checking out.