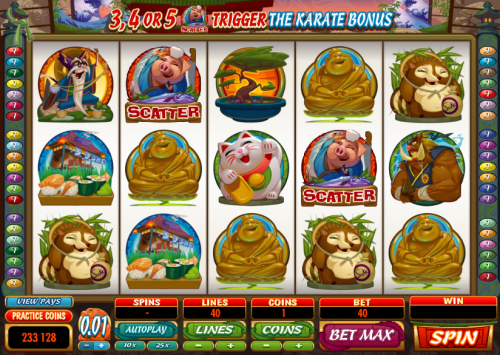 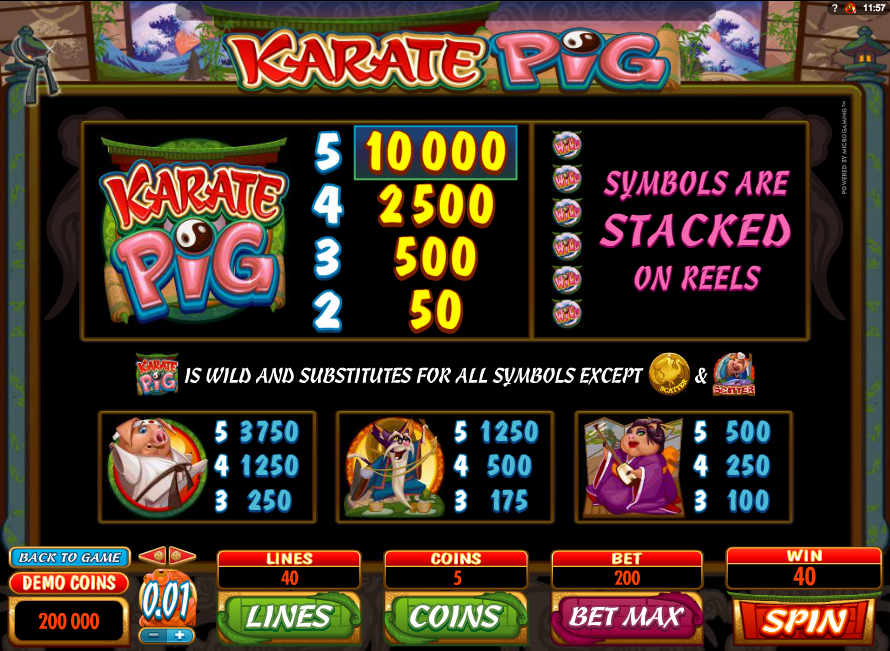 Animals, martial arts, oriental culture – what else could you possibly want from an online slot machine? Karate Pig from Microgaming brings all those elements together to make a compelling gaming experience which is colourful, funny, fast-moving and a real pleasure to play. It also contains enough bonus features to satisfy the most demanding of slots fans.

The basic facts are that it features five reels and a generous forty paylines and the reels are set against a backdrop of a Chinese landscape. The symbols a re all of an oriental nature and include a bonsai tree, sushi, a small bear, a maneki neko waving cat, a gold buddha and a muscle-bound buffalo. Also we have a chubby lady playing a stringed instrument, a bearded wolf and our hero, the pig.

Bonus symbols include a Karate Pig wild, a pig scatter and a gold coin scatter.

Three of the pig scatter symbols anywhere on the reels will reward you with entry into the Karate Bonus game. The ultimate aim is to earn seven different coloured karate belts to play the Final Showdown and to obtain them you need to play the Pork Chop bonus and the Hammer Bonus a combined seven times. Your current belt is displayed in the top left hand corner of the reels.

Gold coin scatter symbols on reels one and five will reward you with fifteen free spins; all wins are doubled during this feature and it’s also possible to re-trigger the spins by landing the coins on the correct reels again.

The base game contains stacked wilds on all reels which means that they appear on top of each other significantly increasing your winning chances.

This is an enjoyable, high quality slot with well thought out bonus features; the oriental soundtrack with it’s karate noises is a particular highlight and we have no hesitation in recommending this game.