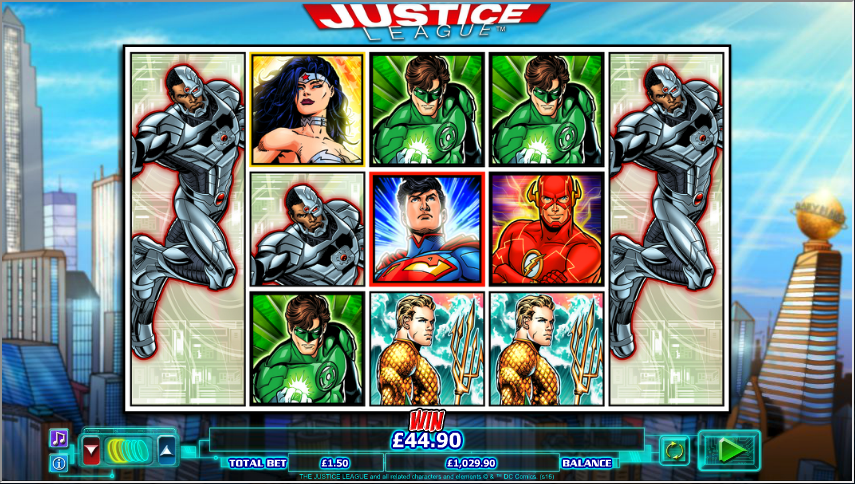 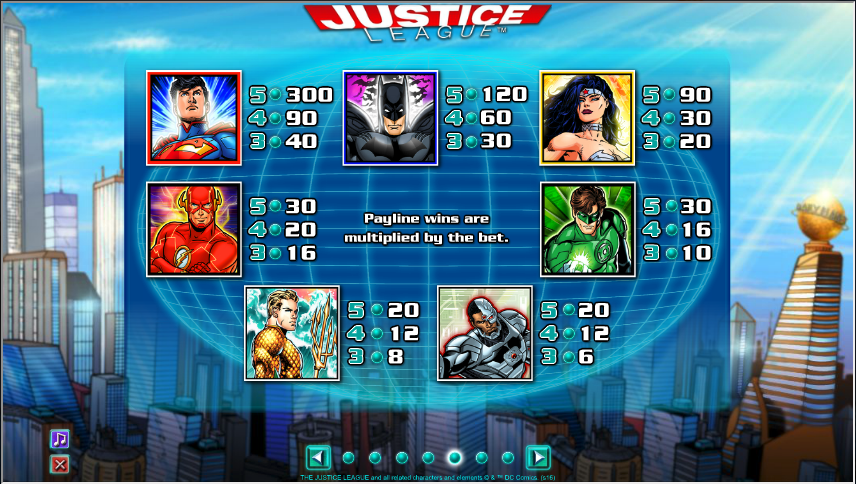 Perhaps one of the lesser known groupings of DC Comics superheroes, the Justice League has been a rotating gang of members since it’s first appearance in 1960 but in this particular online slot we have Superman, The Flash, Wonder Woman, Green Lantern, Batman, Aquaman and Martian Manhunter – read all about it below.

Justice League is a five reel slot with three rows and twenty five fixed paylines; it’s designed in an original comic book style which we like with the reels spinning against a backdrop of the city of Metropolis.

The symbols are all related to the theme and they are all those superheroes listed above – the most valuable is Superman who’s worth 300x your line stake for five on an active payline.

The wild symbol appears randomly on reels two, three and four by transforming from one of the superhero symbols (this is the Team Rescue feature); it replaces all others in a winning combo except the Daily Planet bonus icon.

The superheroes can appear stacked on the reels and if one occupies all positions on reel one and also contributes to a winning combo this feature is triggered.

Reel five duplicates reel one and all of those superhero symbols and wilds are locked in place; the remaining reels now spin and any additional matching heroes or wilds are also locked – when there are no more matching symbols the payout is made.

This is triggered by landing three of the Daily Planet scatter symbols anywhere in view and you are initially awarded ten free spins. Team Rescue wilds appear more frequently here and each wild will contribute to the Super Hero meter on the right hand side – when full it awards a Super Hero Power Up spin when the free spins are finished.

Gamble any win by using the hearts/clubs button by the ‘spin’ button; you can double or quadruple that amount by correctly guessing the colour or suit of the next playing card drawn.

Justice League is a top notch slot with some classic animations, entirely suitable background music and plenty of variation in the bonus features – it comes with an RTP of 96.50% and is well worth checking out.