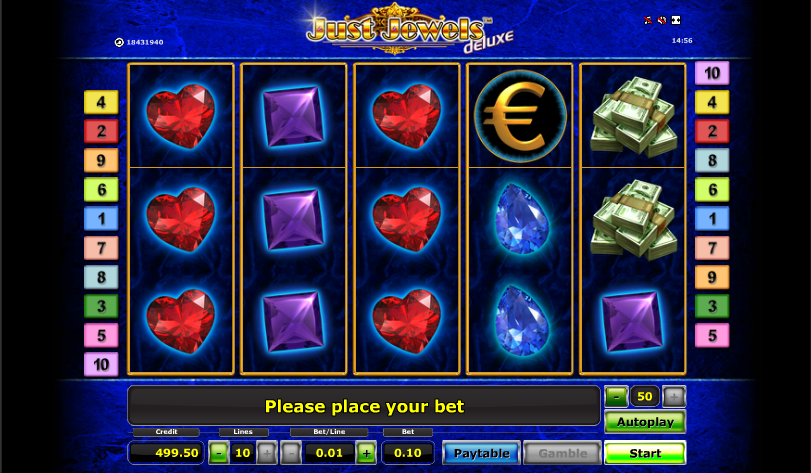 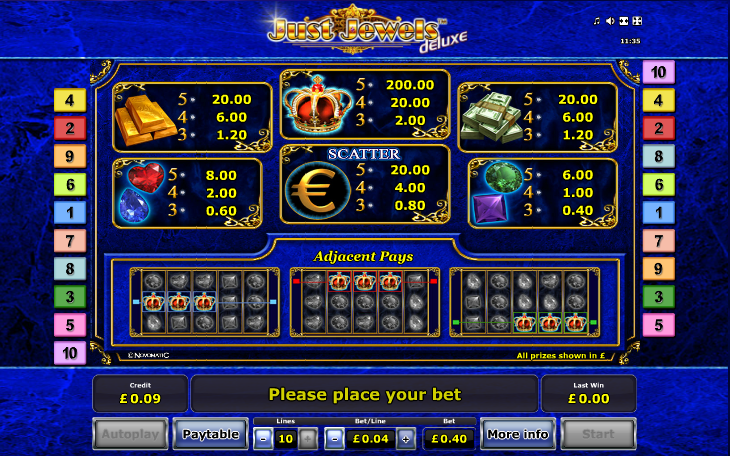 Novomatic are a prolific developer of slot machines, especially the land-based ones we find in casinos around the United Kingdom; many of those are then converted to online versions and that’s the case with Just Jewels Deluxe, an aspirational game based on jewels, money and other objects which represent  great riches.

Just Jewels Deluxe is a very polished-looking slot featuring five reels and ten paylines; this is a game which exudes luxury and the simple but classy design suits Novomatic’s standard layout.

As you might expect all the symbols are are differing representations of things that are worth a lot of money; theses include green, purple, blue and red jewels, a Euro symbol, a pile of cash, some gold bars and the most valuable of all – an ornate crown which is worth 500x your total bet if you can land five on an active payline.

There are no bonus or wild symbols but the Euro is a scatter symbol.

Despite that last sentence, Just Jewels Deluxe does have one interesting feature which is worth discussing.

In a traditional slot we would only be able to land winning combos which start on reel one; occasionally we might play a game in which you can also match symbols from right to left. In Just Jewels Deluxe it’s possible to winning lines as long as the symbols are adjacent.

For example three crowns in adjacent rows and on a payline anywhere on the reels means a win as you can see from the screenshot below.

You can gamble your most recent winnings by using this feature after a win – just predict which colour card will be drawn next to double your win. If you get it wrong you’ll lose you win and be dumped back in the base game.

This is a pretty simple slot but complexity isn’t everything and it’s certainly fun to play; the lack of bonus feature will of course be an issue for some but don’t be put off – give it a go.