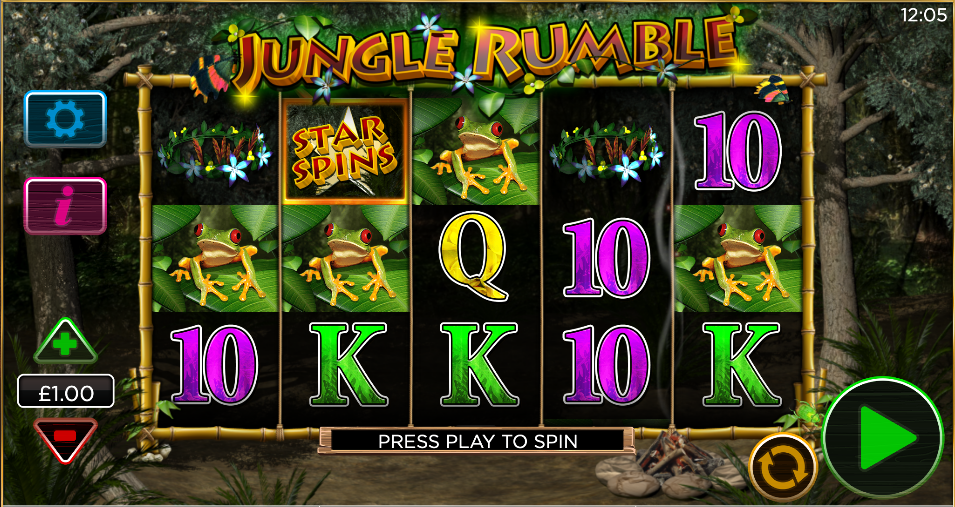 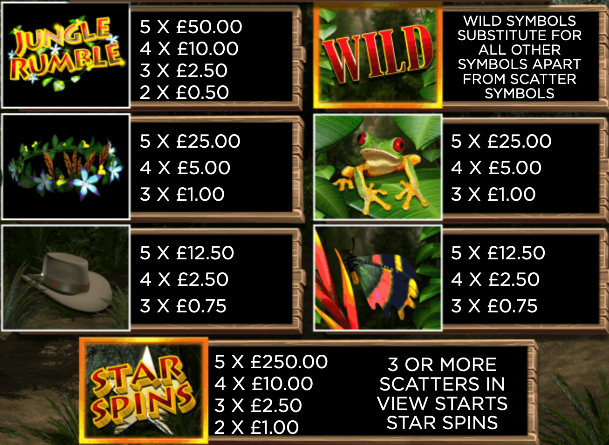 Grab your machetes and your insect spray because it’s time to head back into the jungle courtesy of Jungle Rumble – it’s an online slot machine developed by Storm Gaming Technology with an enhanced free spins round and plenty of cute animals.

Jungle Rumble is a five reel slot with three rows and twenty fixed paylines; those reels spin within a securely tied bamboo frame which is perched in a clearing where a fire smoulders while insects and butterflies move amongst the trees.

The higher value symbols include the Jungle Rumble logo, a frog, a hat,a  butterfly and a ring of blue flowers; 10, J, Q, K and A represent the lower values.

The wild is a big, red ‘Wild’ which will substitute for all standard symbols to help create winning matches while the Star Spins symbol is the scatter. The scatter is also the most valuable and worth 250x your line stake for five anywhere on the reels.

Actually called Star Spins in this game, this feature is triggered by landing at least three of the Star Spins scatter symbols anywhere in view foe which you’ll receive ten free spins.

The first thing to do is pick three stars from those on display to reveal three standard symbols – these, the wild and the scatter will be the only ones on the reels during this feature which should help increase the value and frequency of the wins. Landing at least three more scatters during this round will award another ten free spins.

Jungle Rumble is a a basic but enjoyable slot with some colourful animals on show and a free spins round which should prove profitable with just the three symbols in use.