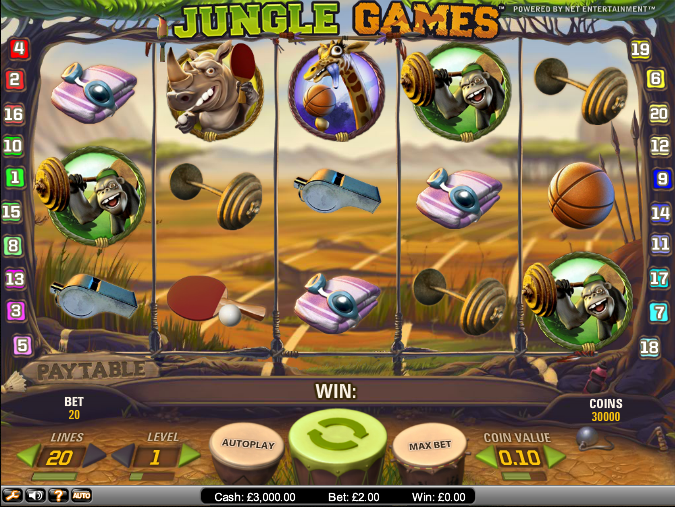 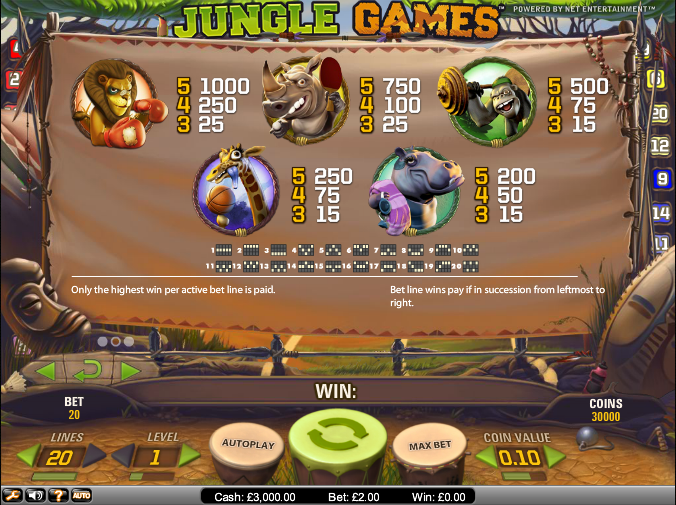 The combination of animals and sport has provided us with several online slot machines over the years; the animals concerned are generally competing against each other in a variety of athletic events and now Jungle Games from Net Entertainment has become another addition to this genre.  Being a Net Ent slot there are of course one or two features which make it stand out from the crowd.

Jungle Games features five reels and twenty paylines and through the transparent reels we can see a grassy, hot savannah; in the foreground there’s the curve of a running track, something not normally seen on the plains of Africa.

This, however, is a sporting event and the animals are fully prepared to take part in chosen events as we can see from the symbols which include a whistle, goggles and a towel, a basketball, barbells, a table tennis bat and ball, boxing gloves and then the animals themselves – a hippo, a giraffe, a gorilla, a rhino and a lion.  Each animal is set up for a different sport.

Bonus symbols include a gold trophy wild and a gold medal scatter which activates the bonus game.

The scatter symbol is the key to the bonus feature in Jungle Games and if you can land three, four or five anywhere on the reels you’ll get to choose which game to play with the Pick Win feature.  Just choose whether you’d like free spins or a quick cash prize as follows:

Bonus Win – if you’ve picked this option all you need to do is click one of the scatter symbols to reveal the prize.

Free Spins – choose the free spins and you’ll will also pick a scatter symbol but it will reveal the number of spins and the multiplier applied to those free goes.  More free spins can be won during this feature.

Jungle Games contains all the graphical quality we expect from a Net Entertainment game but, relative to it’s own high standards, it’s lacks a little in the bonus features.  That’s not to say it’s a bad game – it certainly isn’t – and the jungle soundtrack is a pleasure to listen to.