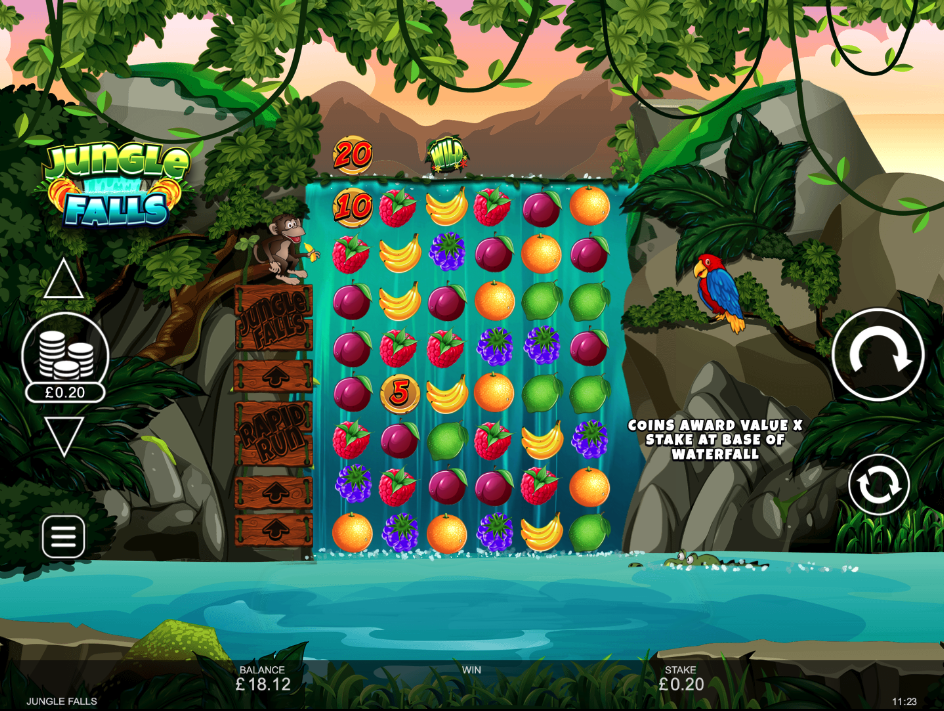 Deep in some tropical rainforest there’s a waterfall surrounded by greenery and colourful animals – this is the setting for Jungle Falls, this online from Inspired Gaming and it comes with collapsing reels, base game bonuses and free spins from just £0.20 per spin.

Jungle Falls plays out on the 6 x 8 grid you can see above and the aim is to create clusters of at least five matching symbols which connect horizontally and/or vertically; each symbol in a winning combination will then disappear and be replaced by more falling on from above, potentially continuing the process.

There are just six regular symbols and they’re all fruity – bananas, oranges, strawberries, limes, plums and grapes; wilds, coins and the multicoloured gem are the special symbols.

There’s a horizontal reel above the main set which moves one step to the left on each spin and contains coins, wild symbols or blank positions; if there’s a reel collapse below they’ll drop onto the reels:

Creating subsequent combos and reel collapses will light the trail to the left of the reels; reaching the third and fifth stages will award the following features:

One of the three animals around the reels may activate their feature after a collapse:

Landing three of the multicolour gem symbols anywhere on view will award eight free spins with two extra spins for any more gems on the reels. Each cascade during this round will increase the win multiplier for any subsequent wins by 1x with no maximum.

More free spins can be triggered by landing three more gems during this feature.