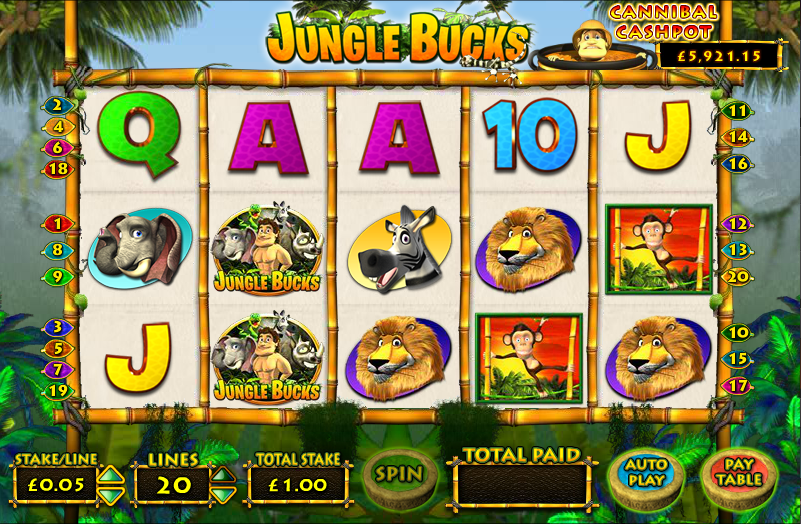 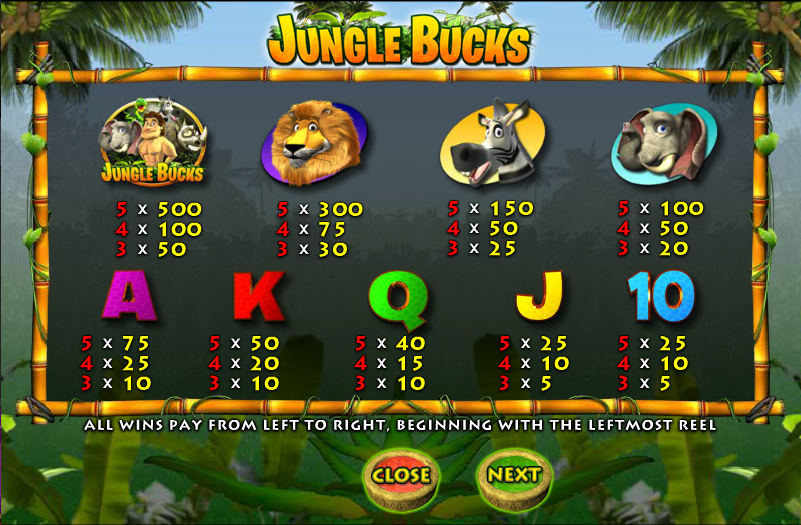 We like an animal-themed online slot as much as the next person, especially one in which all the animals are cute, cheerful and unlikely to hunt each other. Jungle Bucks is one such game; it’s from Inspired Gaming and not only does it include numerous bonus features, there’s a progressive jackpot to be won.

Jungle Bucks is a five reel slot with three rows and up to twenty paylines and it has the sort of cheerful cartoonish design that is instantly engaging. There’s a steamy jungle background to the reels which are framed by bamboo.

The high value symbols are the Tarzan character, a lion, a zebra and an elephant; 10, J, Q, K and A are the lower values.

There are two wilds – a wild and a super wild (more details below) and four bonus symbols – snakes, ostriches, monkeys and the Cannibal Cashpot – which trigger different features.

This is triggered by landing three or more of the monkey symbols anywhere in view; click the screen to shake the tree and dislodge coconuts, each of which will reveal a cash prize. Keep shaking the tree until a coconut knocks out the monkey and the round is over.

Three or more ostriches anywhere in view will trigger this feature; now pick an ostrich to take part in a race and you will win money depending on it’s finishing position. If you’re lucky the ostrich will pick up multipliers on the way.

Three or more snake symbols in view will award a random number of spins on a special reel set. Each symbol which lands will help to fill up columns of matching symbols; each completed column wins a prize and the trail resets.

This is a randomly activated feature and occasionally the rhino will shake the reels. Some symbols will disappear to be replaced by new ones, hopefully forming wins.

This is won by landing five of the Cannibal Cashpot scatter symbols anywhere in view; bear in mind that you must be wagering at least £1.00 per spin to qualify for the big bucks.

We like everything about this slot – the numerous bonus features, the graphics, the sound effects and of course the progressive jackpot. There’s also a perfectly decent RTP of 96.01% so give it a go.