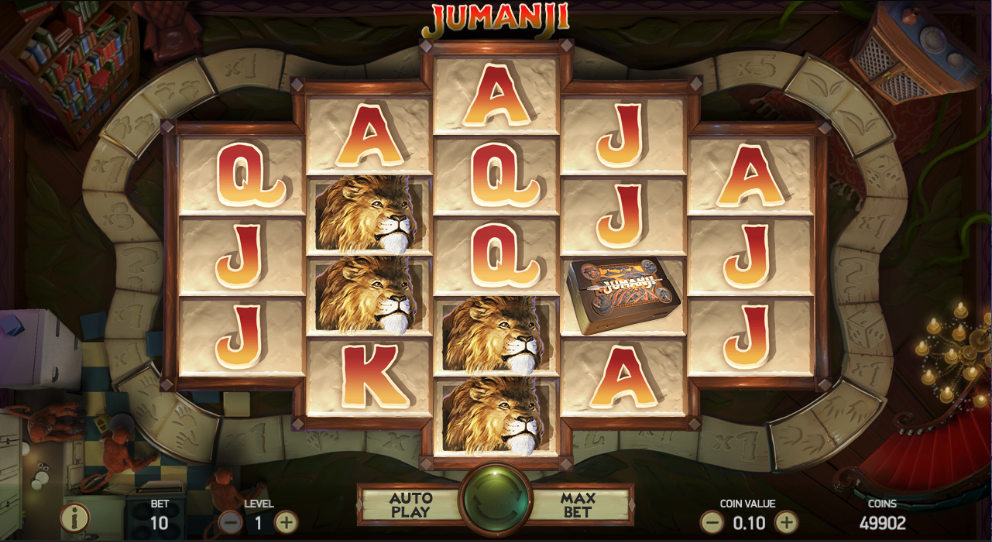 You may have seen the more recent movie version of Jumanji with Dwayne Johnson starring but this online slot machine from Net Entertainment is based on the original film from 1995 with Robin Williams and Kirsten Dunst. It’s full of themed features and top notch graphics so read on to find out more.

Jumanji is a five reel slot with variable rows and thirty six fixed paylines as you can see from the video above; we are looking down on the reels from above and they are ringed by the board game laid onto the floor of the room we are in. There’s the occasional movement from a monkey in the bottom left hand corner.

The high value symbol in Jumanji are the lion, the rhino, the crocodile and the pelican; J, Q, K and A are the lower values.

The wild is a big, gold ‘Wild’ which will replace all others to form winning matches except for the Jumanji box scatter symbol.

This can be triggered if you land at least two different winning combos and no more than nine in one spin; you’ll now receive a respin with those winning combos, including wilds, held in place and if more symbols add to them the respins will keep on coming. Payouts will be awarded when there are no more wins.

This can occur randomly in the base game and one or two reels will turn completely wild.

This also occurs randomly in the base game and the reels and symbols will be shuffled for a guaranteed win.

This is another randomly occurring feature and you will see rhinos maraud across the reels, adding up to nine wild symbols as they go.

This is where the real fun starts and it’s triggered by landing at least three of the box scatter symbols anywhere in view; depending on whether you landed three, four or five scatters you’ll now get 6, 7 or 8 rolls of the dice.

Those dice rolls will now move your chosen token around the board with the aim of landing on the options explained below:

Jumanji is a genuinely multi-faceted slot with some state of the art graphics, an admirable adherence to the narrative of the original film and lots of interesting bonus features. It’s definitely one to check out and it comes with an RTP of 96.33%.