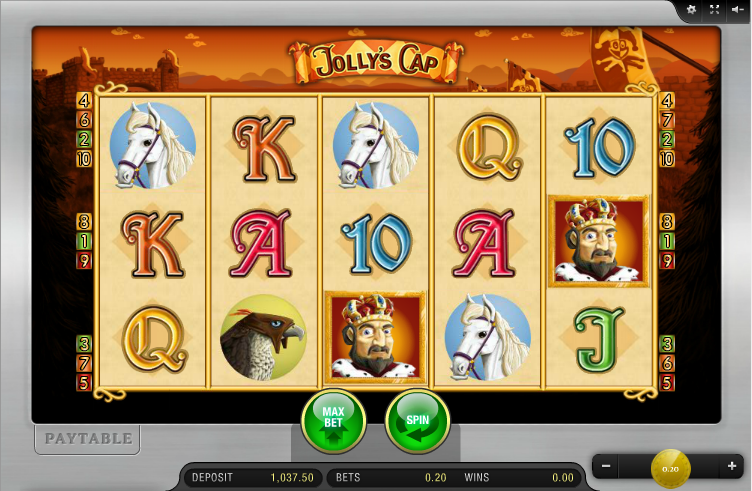 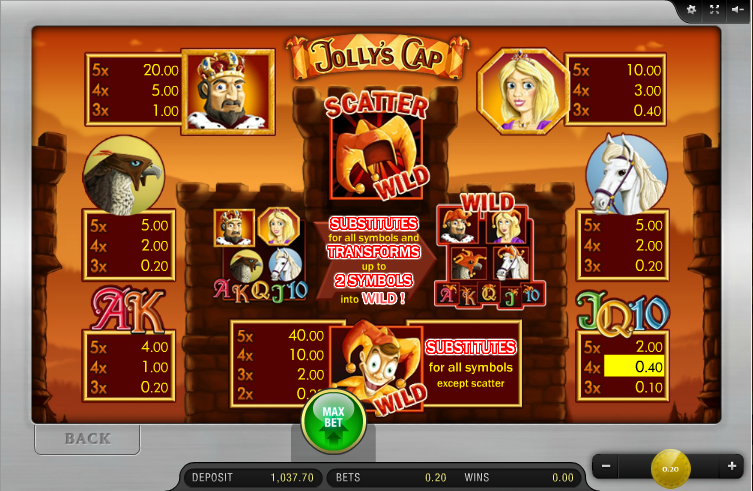 We’ve played and reviewed plenty of medieval online slots over the years and these games tend to focus on what we might call the celebrities of those times – kings, queens, dragon-thwarting knights and the like; the subject of Jolly’s Cap is one of the lesser lights of this era, he’s a court jester and in this case his name is Jolly. His cap is of particular interest in this Merkur Gaming release.

Jolly’s Cap is a five reel slot with three rows and ten fixed paylines; those reels themselves are relatively basic but the background is nice collage of castle ramparts and hills u basking in the glow of a setting sun.

There are just four high value symbols and these comprise a king, a queen/princess, an eagle and a white horse; 9, 10, J, Q, K and A represent the lower value icons.

Jolly himself acts as the basic wild and he substitutes for all other symbols except the scatter; the scatter is represented by Jolly’s Cap and it’s also a wild upon which we shall elaborate below.

This is really the game’s only extra feature and it’s triggered each time Jolly’s Cap lands; this symbol is a wild and it will also transform up to two other symbols on the reels into wilds. You will know they are wild because they will suddenly be wearing the cap.

Jolly’s Cap probably doesn’t offer enough variation for us to recommend it unconditionally but it’s worth a few spins and the wild feature is clever. We don’t generally like gamble features so we’re not sure whether having two is better or worse. There’s an RTP of 96.40%.