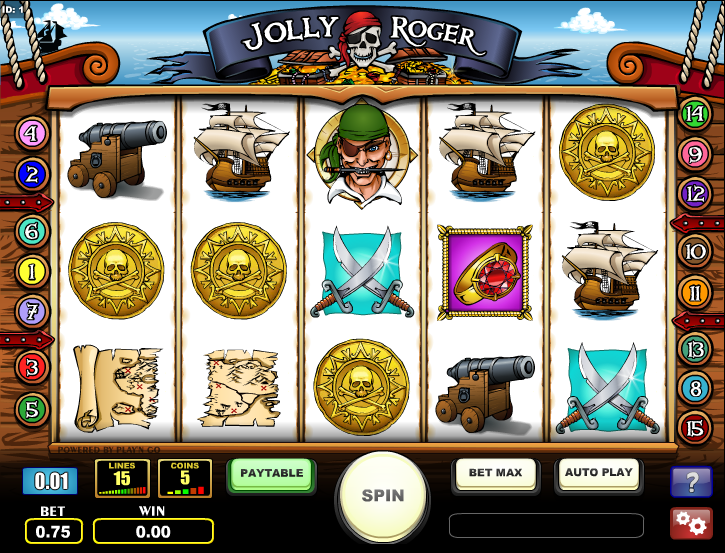 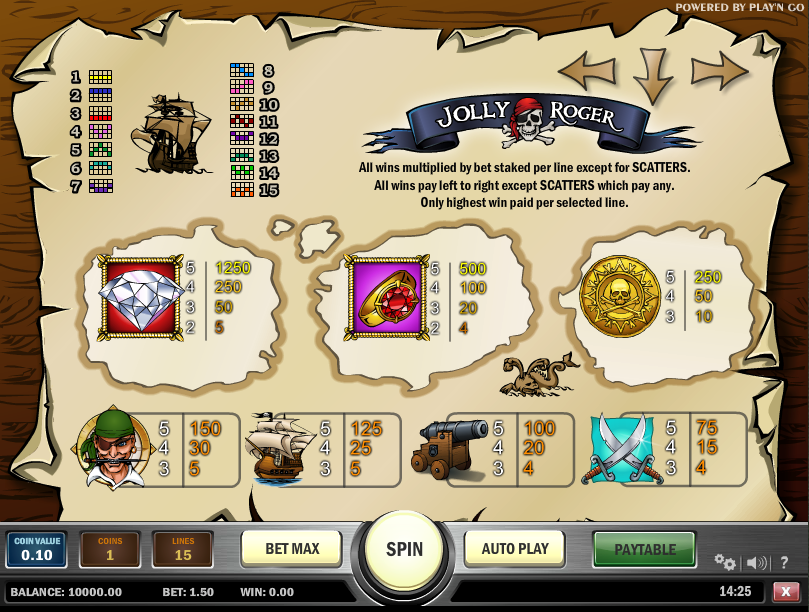 Swab the mainbrace, board the rigging and hoist the cabin boy! Those words may be in the wrong order but we really have no idea what we’re talking about.  What we do know however is that Jolly Roger is an online slot from Play N Go which celebrates the life of the pirate.  Whether those short and brutal existences should have been celebrated is something else altogether but this is only a game.

Jolly Roger has five reels and fifteen paylines and the backdrop to the reels is of course a pirate ship; in the distance a silhouetted craft drifts across the horizon.  All the symbols are pirate-related and include cutlasses, cannon, a ship, the one-eyed pirate, a gold coin, a red-jewelled ring and a huge diamond.

There’s lots of bonus symbol including a parrot scatter, a pirate flag (Jolly Roger) wild, pieces of a map and a locked chest.

T0 earn this reward you’ll need to land three of the map pieces on reels one, two and three; you’ll see that the left part of the map is on reel one, the middle is one reel two and the right part is on reel three.

Manage that and you’ll be shown a treasure map on which are some crosses – pick three and each will reveal a prize amount.

This is fairly similar and you need to land three or more of the chests anywhere on the reels; you’ll now be taken to a screen showing a number of chests on a big pile of gold. Pick two to reveal the prizes you’ll be awarded.

Both the bonus symbols will only win on an active payline so the more paylines you play, the better. The parrot scatter can be won with minimum stakes and lines played though.

The graphics may not be absolutely top notch here but there’s a certain cartoonish appeal to Jolly Roger which most gamers should appreciate, even if only for a little while.