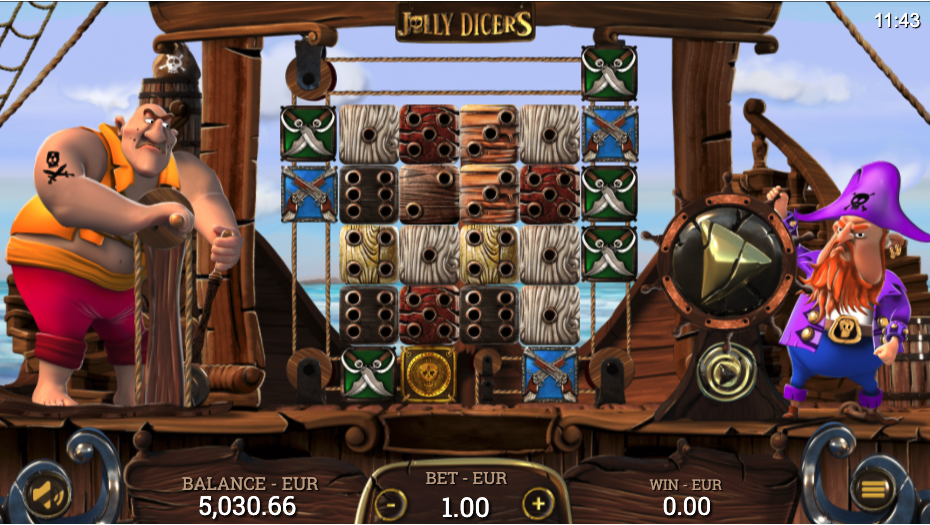 Piracy has always been one of our favourite themes for online slots and Jolly Dicers brings us one more example to enjoy – it’s developed by Relax Gaming/Dice Lab and it offers a clever gameplay mechanic and loads of pirate-themed features.

Jolly Dicers plays out on the gris you can see above and it consists of a 4×4 inner area into which the dice symbols fall and an outer area which revolves around the outside and contains only special symbols. All the action takes place on our pirate ship with the captain and his large crewman cranking the reels into life.

The only symbols on the inner area are dice, obviously numbered one to six and your task is to create clusters of at least four matching ones, after which those clusters will disappear and be replaced by more falling in from above, creating the opportunity for more wins. With each successful cluster another special symbol will be added around the outside.

The wax seal is wild and if it lines up around the outside with a cluster it will add to that win.

The features are triggered by landing identical symbols opposite each other on the outer area:

If you’ve managed to trigger the free spins with two coins opposite one another you’ll start with six spins but before each spin you must roll the dice – the two values on the dice are removed from the reel set for this spin and a double will award an extra spin.   Each successful cascade will increase the win multiplier by 1x for that spin only. There’s no outside area during this feature.

This is one of the more interesting gamble features we’ve encountered and if you take the risk you’ll be asked to roll the dice which will determine how many steps along the plank the pirate will walk. The first few steps increase the win but then it starts decreasing by percentage amounts before increasing again.

Jolly Dicers brings some welcome innovation to the gameplay here and when that’s combined with top notch graphics, a pirate theme, loads of easily-triggered features and cascading symbols then you’ve got a winner – highly recommended!