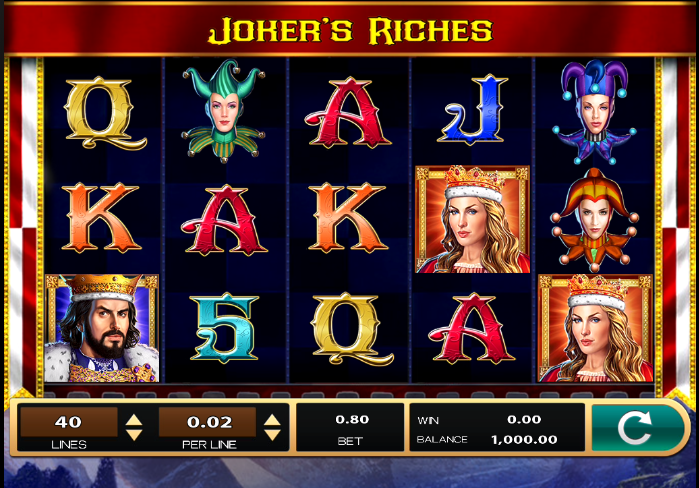 The court of some medieval king is the setting for this online slot from High 5 Games; it’s called Joker’s Riches and it comes with plenty of free spins along with the opportunity for those jokers to go wild and earn you a bit of cash.

Joker’s Riches is a five reel slot with three rows and forty fixed paylines; music from the time period accompanies your gameplay which takes place on a set of reels flanked with red and white standards.

The higher value symbols include the jackpot, the king, the queen and three jokers in blue, red and green; 5, J, Q, K and A represent the lower values.

There are three wild jokers in the same colour as the base game symbols and they all appear only on reel five – we’ll explain what they do shortly. The bonus symbol is the Free Games icon.

The blue, red and green jokers with wild attached appear only on reel five and if their appearance coincides with a similar coloured standard joker anywhere else, that joker will become wild also to help out with some winning combos.

This is triggered by landing three of the Free Games bonus symbols anywhere on reels two, three and four for which you will receive an initial seven free spins. The Wild Jokers are active here also but unfortunately it’s not possible to trigger any more spins from within this round.

Joker’s Riches is quite a basic slot in terms of graphics and gameplay but it has a certain historical charm, aided by the gentle medieval music and rather clever Wild Jokers.