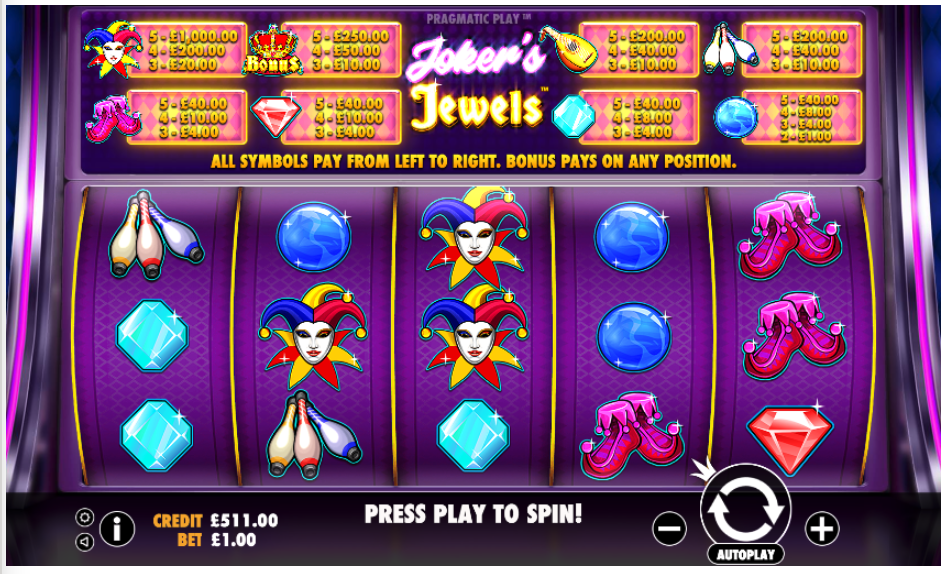 If you’d like to play something a little simpler than the increasingly popular feature-heavy online slots then why not check out this back-to-basic game from Pragmatic Play; it’s called Joker’s Jewels and the only thing you’ll need to understand is the whereabouts of the ‘Spin’ button.

Joker’s Jewels is a five reel slot with three rows and just five fixed paylines; there’s lots of purple here and the design is of a physical machine, straight from the sticky floor of an Atlantic City casino; the reels spin in a glitzy way beneath the paytable which flashes constantly and notifies you of any winning combinations.

There are eight symbols in this game and they include the Joker (he’s the highest value at 1000x your line stake for five on a payline), his lute, a set of juggling skittles, a pair of pink, bell-capped boots and three jewels – red, light blue and dark blue.

There may not be any bonus features but there is a bonus symbol represented by a jewel-encrusted crown and in fact this is the scatter – you’ll need at least three of these anywhere in view to earn anything from their appearance. The only symbol which pays out for two on a payline is the least valuable, dark blue gem which pays back your stake.

That, ladies and gentlemen, is all there is to Joker’s Jewels so set the stake you require, click the Autoplay button and away you go.

Joker’s Jewels clearly won’t appeal to those who value any sort of bonus features but if you just like to spin the reels and match the symbols then this is for you; it has an RTP of 96.50% so check it out.