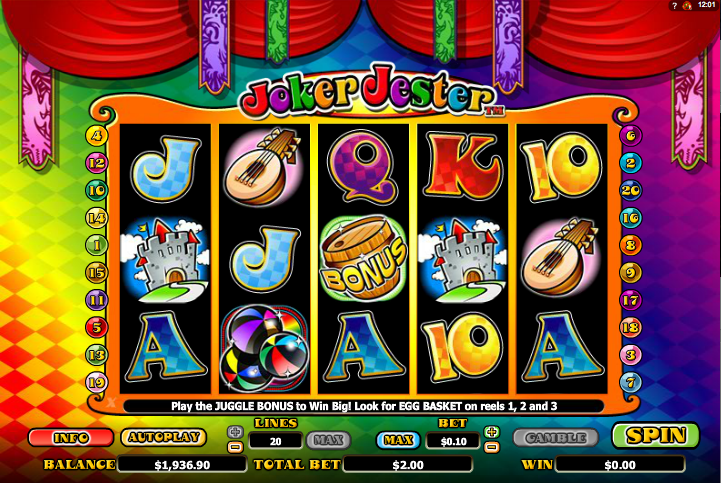 Let’s take a trip back several hundred years to a time when the best sort of entertainment a member of the royal family could hope for would be a jester or a joker. Those two characters are the theme of this online slot from NextGen and it’s name is Joker Jester. It’s basic but colourful and there are several bonus features to keep you entertained.

Joker Jester is a five reel and twenty payline slot; the backdrop to those reels are some colourful decorations and ‘cheerful’ might be  a good word to describe this game.

10, J, Q, K and A are the low value symbols and there are just two higher value ones – a lute and a castle. There are several special symbols though and they include a juggling balls scatter, a jester wild and two bonus symbols – a barrel and a basket of eggs.

Land the basket full of eggs anywhere on reels one, two and three to trigger this feature. Check the video above for an example but you will be faced with the jester juggling several eggs. Your task is to add eggs to the trick until you think he’s reached his limit at which point you can collect the prize multiplier. If he drops the eggs it’s game over.

There are certain levels at which you’re progress will be saved and these are denoted by a padlock on the multiplier scale to the right.

A golden egg will increase your multiplier prize very quickly so it’s a good thing to pick those.

This is triggered by landing the barrel on reels three, four and five and it’s a simple mini-game. You will be shown a number of barrels and all you have to do is keep picking them and revealing prizes until you find the jester, at which point the game is over.

This can be randomly awarded after any spin and the jester will leap around on the reels, leaving wilds scattered about. When he’s finished the paylines will be re-evaluated for any new wins.

Any win can be gambled by pressing the ‘Gamble’ button underneath the reels. You can try and double or quadruple your win by correctly guessing whether the next card drawn is the right colour or suit. You are allowed five correct guesses.

Take care with the gamble feature – it’s tempting to have a punt after every win but that’s the road to ruin. Do it occasionally and don’t try for too may correct guesses in a row.

It’s basic, it’s colourful, but it does have a certain appeal even if its a little dated. It’s difficult to criticise too much when there are so many extra features.