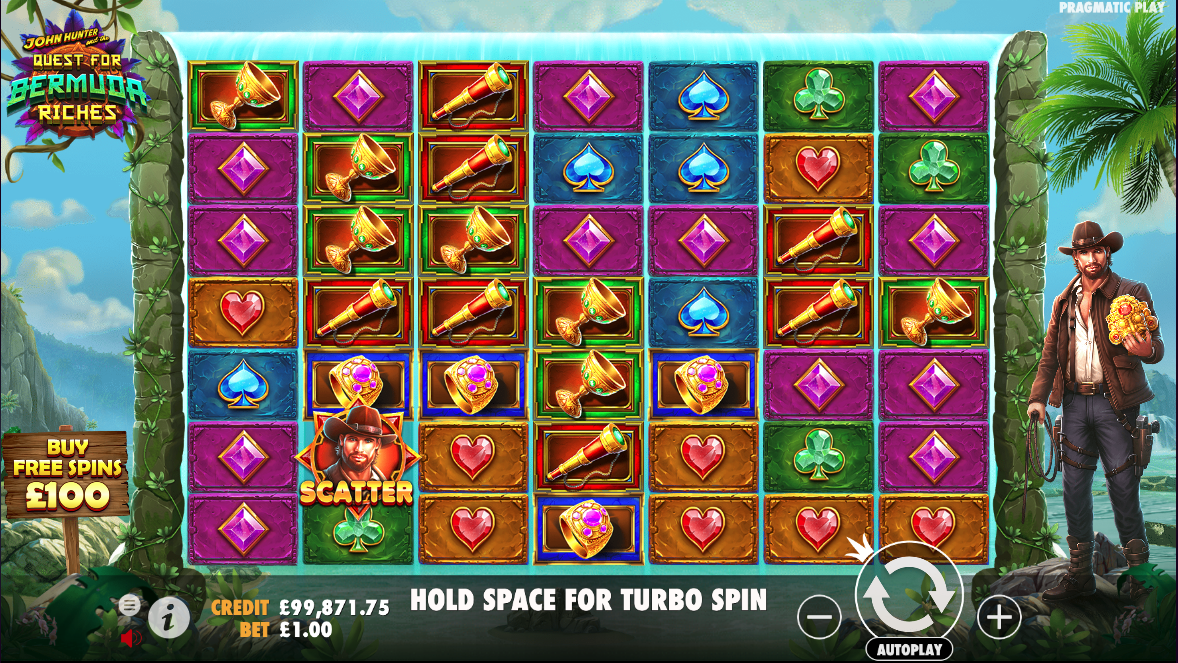 Behold the return of one of one of our favourite grave robbers and this time he’s pitched up in the Caribbean to scour the islands for long lost pirate treasure; this is John Hunter and the Quest For Bermuda Riches, an online slot from Pragmatic Play with a cluster gameplay mechanic, free spins and treasure chests fill of prizes.

John Hunter and the Quest For Bermuda Riches takes place on the 7 x 7 grid shown above and John, standing to the right hand side, looks as if he’s enjoying himself among the waves and palm tress, clasping a gigantic golden object in one hand and his trademark whip in the other.

Three pieces of treasure – a ring, a cup and a telescope – represent the high value symbols while playing card symbols in blue, red, green and purple make up the lower values. The golden mask is wild and the special symbols are John, the box of coins and the four treasure chests.

John Hunter and the Quest For Bermuda Riches Bonus Features

There’s a cluster gameplay mechanic here in which your task is to land blocks of at least five matching symbols connected horizontally and/or vertically; those symbols involved will then disappear and make way for more to fall in from above and there’s a chance that the process will continue.

The box coins can appear on all reels and it will always display a value which is a multiple of your stake; if one of the following four chests lands on the same spin then this stuff can happen:

If a Cursed Wild lands on the reels it will either add a 2x multiplier to any wins it helps with or it will add extra wilds in random positions.

Landing at least three of the John Hunter scatter symbols anywhere in view will award twelve free spins and the Money Collect feature is still active during this feature.

In addition all values from the coin boxes will be collected and totalled in the top right hand corner and when the round ends a wheel will spin – this wheel has three winning segments and five losing ones so obviously you have a 3 in 8 chance of winning this jackpot prize.

Five more spins are available if you land three more scatters during this round.