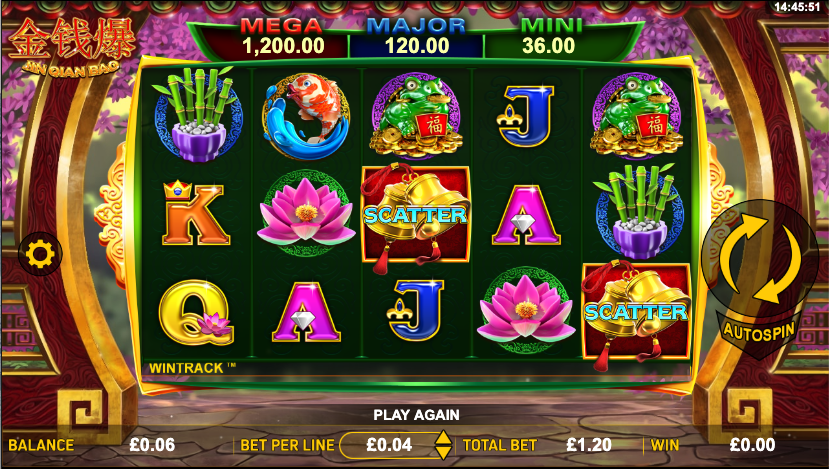 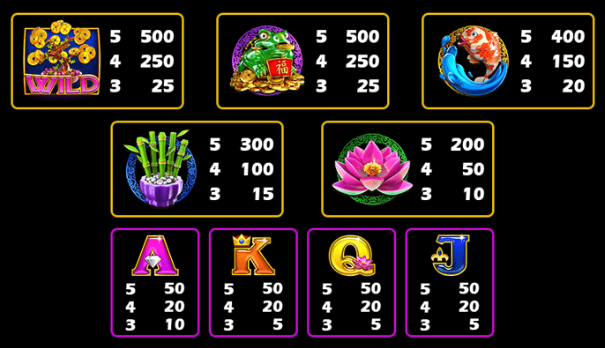 Well we can’t be sure but our efforts to translate Jin Qian Bao into English have resulted in the word ‘leopard’ so let’s stick with that – anyhow this is an online slot from Aspect Gaming with a Chinese flavour and several colourful bonus features – keep reading to find out how it all works.

Jin Qian Bao is a five reel slot with three rows and thirty fixed paylines; those reels spin within an elaborate curved gateway behind which purple blossom arches over the flagstones.

The theme-related symbols include a pot of bamboo, a toad on a pile of gold coins, a pink lotus flower and a Koi carp; J, Q, K and A make up the lower values.

The wild symbol is a bonsai tree draped with gold coins and it will substitute for all others to help form winning combos except for the bells and the big, gold coin bonus symbols.

This is triggered by landing three of the bell bonus symbols anywhere on reels one, three and five; you’ll receive the stated number of free spins on a set of reels in which reels two, three and four join together to form giant symbols and increase the chances of bigger wins. One big bell symbol will award three more spins and a big coin bonus symbol will trigger the other bonus feature and the jackpot.

Trigger this by landing at least six gold coins in the base game or one giant one in the free spins; those coins will lock in place and you’ll receive three free spins on a set of reels which contain only coins and blank spaces. Any new coins will lock also and the number of spins will reset to three again – when this is all finished you’ll win the value on each coin (up to 100x total bet), the Mini or Mega jackpots or the Major one if all spaces are filled with gold coins.

Jin Qian Bao is an intricate and well-designed slot with lots of bonus features to keep things interesting and some jackpot prizes to aim for – the only downside is a slightly low RTP of 93.98%.