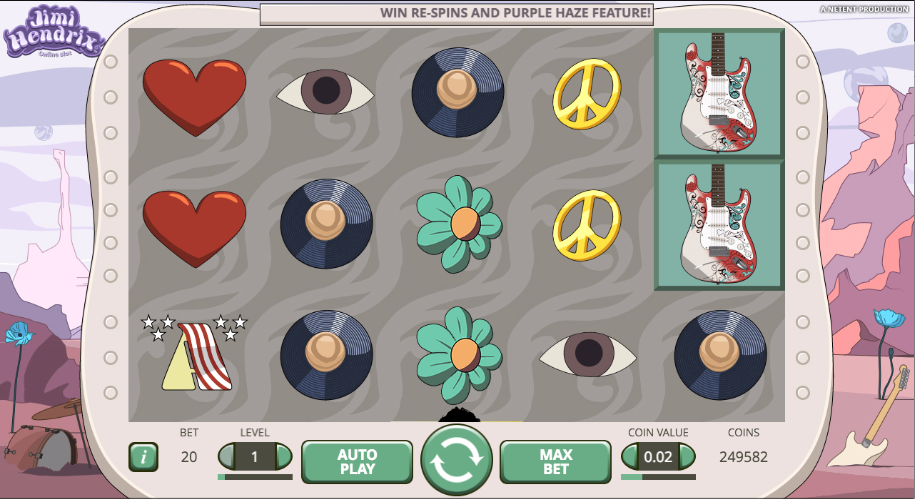 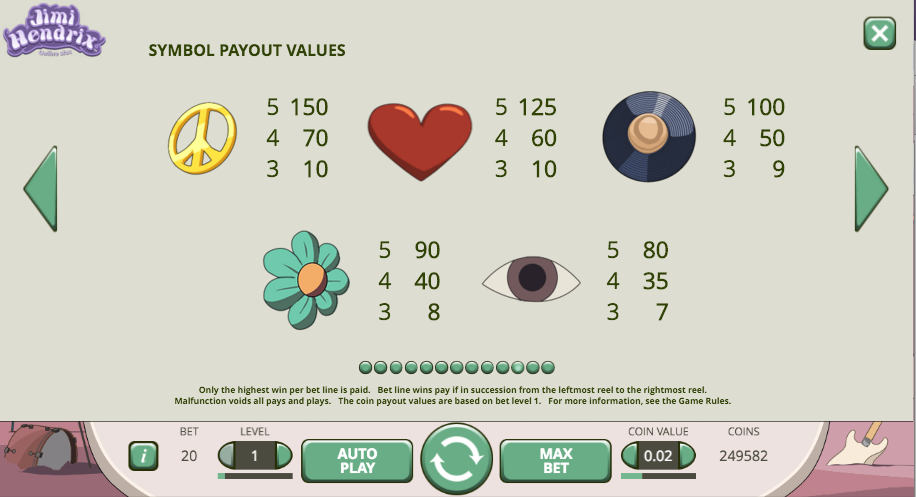 Jimi Hendrix was the innovative American guitarist who was responsible for songs such as Purple Haze and Foxy Lady and now his legend lives on in one more medium as he gets an online slot machine all to himself. It’s called simply Jimi Hendrix, it’s developed by Net Entertainment and it’s simple looks are complemented by a Hendrix soundtrack and several bonus features.

Jimi Hendrix is a five reel slot with three row and twenty fixed paylines; there’s certainly a psychedelic vibe to this game and although the graphics seem basic, they are perfectly in tune with Hendrix’ era. The backdrop to the reels is a dreamlike desert view.

There’s an interesting bunch of theme-related symbols including the white guitar, the peace logo, a heart, a vinyl disc, a flower and an eye; lower values are 10, J, Q, K and A, designed in a funky and contemporary way.

Jimi himself is the wild symbol and he will substitute for all others except the various scatters – they include the Purple Haze, the red guitar and the Jimi/white guitar symbols.

This is triggered by landing three of the Jimi/white guitar scatter symbols anywhere on reels three, four and five; you now get to play a picking game until you have found three matching symbols which will award one of four different features:

Trigger this by landing the Purple Haze symbol anywhere on reel one – that icon becomes wild along with 10, J, Q, K and A and the payout will be evaluated.

Four red guitar symbols anywhere in view will trigger this feature; those guitars will remain in place for one respin and if more red guitars land this process continues. When no more guitars land the payout will be evaluated and the round is over.

Jimi Hendrix may look basic but the design is actually spot on and there’s something quite different about this slot; the gameplay is smooth, fairly addictive and there’s a wide variety of bonus features to aim for. The RTP is 96.90%.