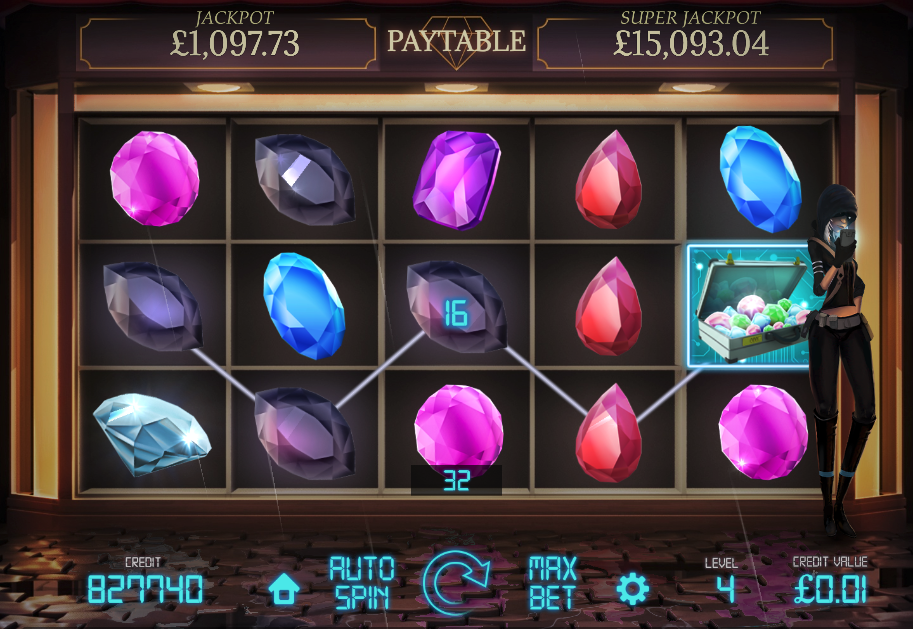 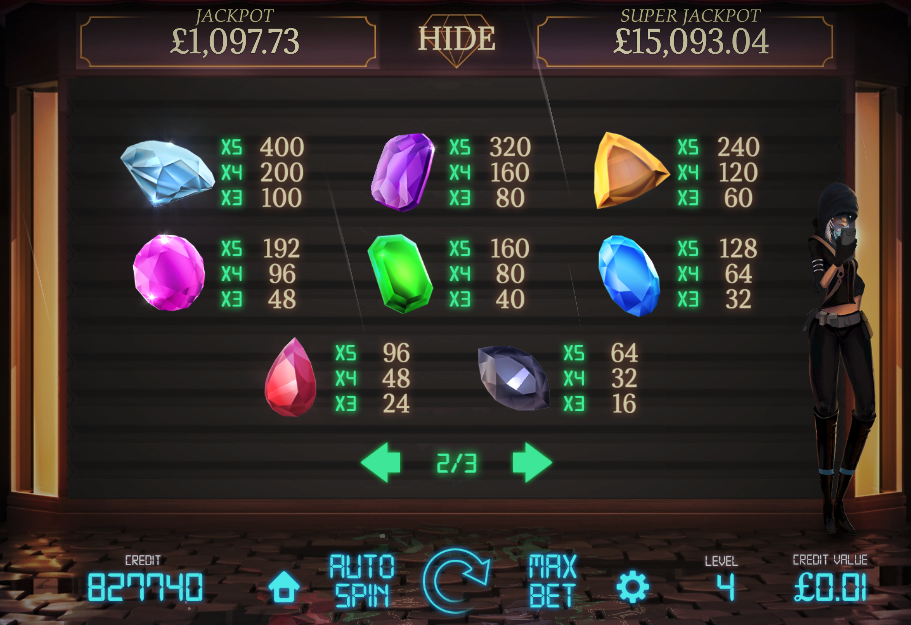 Crime is the occasional theme of various online slot machines and here we have the opportunity to follow career criminal and cat burglar Julie as she attempts to steal things which don’t belong to her; this is Jewel Heist, a release from Magnet Gaming with several creative bonus features.

Jewel Heist is a five reel slot with three rows and seventeen fixed paylines although it should be noted that wins can be formed from right to left as well as left to right; the gameplay takes place in the window of a jewellery shop on a dark and rainy night.

All the symbols are related to the theme and they are all precious gems of various shapes and colours – light blue, purple, yellow, pink, green, dark blue, red and dark grey.

There’s no wild symbol in Jewel Heist but there are three bonus symbols – the case of jewels, the infrared goggles and the remote control thing.

This is triggered by landing two of the jewellery cases anywhere  in view and you’ll get to play a picking game in which you must select from from fifteen cabinets to find jewels and avoid the security camera which will end the round. Finding seven or fourteen jewels respectively will trigger the Jackpot Flash or Super Jackpot Flash rounds.

Trigger this by landing four of the infrared goggle scatter symbols anywhere in view and you’ll be taken to a screen in which Julie hangs above a grid of lasers and jewels; you now have twelve attempts to grab jewels , some of which will also award two or three extra picks. Depleting a whole column may lead you to the Super Jackpot Flash opportunity.

This is triggered by landing three of the remote control devices anywhere on the reels; now press the blue button until the lights next to The Heist, Break-In, Jackpot Flash or Super Jackpot Flash have filled up. The one which fills up first is the feature which will be played.

These progressive jackpot opportunities are kicked off via the bonus features described above and each will display five different prizes plus the jackpot; a light will flash between them to award one prize – hopefully the jackpot.

Jewel heist is another intricate and well-designed slot from Magnet Gaming with their trademark lengthy bonus features, tempting progressive jackpot and an RTP of 96.50%. Just don’t worry too much about being on the right side of the law.