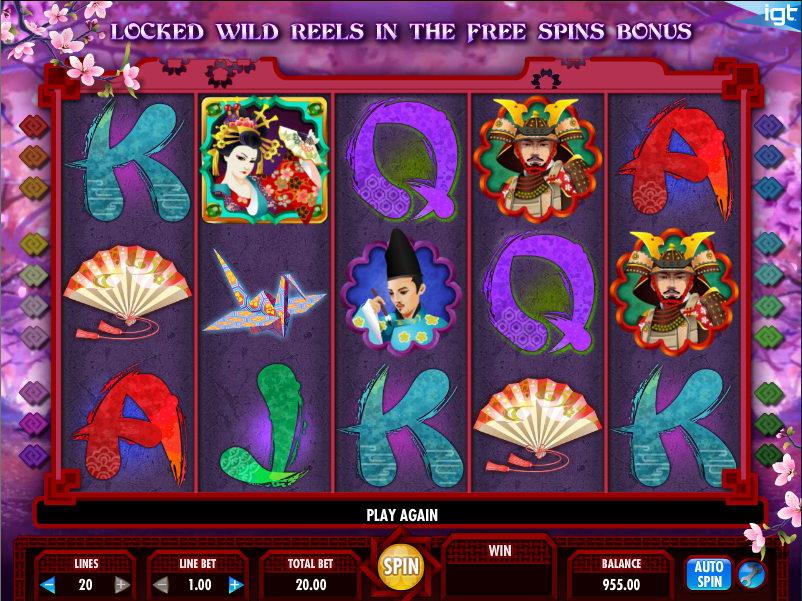 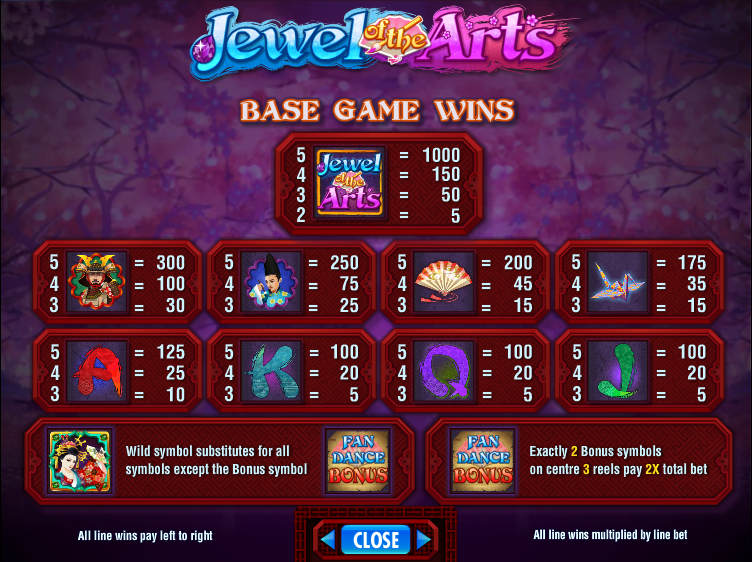 The mysterious Orient is once again our destination as it has been so many times in the past; online slots developers seem to be drawn towards this theme and this one is from IGT; it’s called Jewel Of the Arts and it’s subject is not just Japan but the creative arts of that Asian nation.

Jewel Of The Arts is a five reel and twenty payline game and the backdrop to those reels is a Japanese gar end in full blossom; look to the sides of the reels and you will see that blossom gently falling to the ground.

While the basic symbols are still J, Q, K and A they are drawn in the style of Japanese calligraphy to fit in with the artistic theme. The more valuable symbols are an origami bird, a decorated fan, an artist and a Japanese warrior.

The geisha girl is the wild symbol and then there’s a Fan Dance bonus icon which is the key to the main feature.

This is the minor of the bonus features and all you need to do to trigger it is land two of the Fan Dance symbols anywhere on the centre three reels. This will award you a multiplier of 2x your total stake.

This is a free spins round and to trigger it you will need to land three of the Fan Dance symbols anywhere on the centre three reels; you only begin with three spins but on the first spin reel two will be completely wild, on the second spin reels two and three will be wild and on the third spin – you guessed it – all three centre reels will be totally wild.

If you can land the Extra Spin symbol on reel one during this feature you will be awarded one more spin with the wild reels held in the same place.

If you just want to play for the feature than reduce your paylines to save money – the Fan Dance symbol is a scatter which will be active whether or not it’s on an active payline.

Among a deluge of Oriental-themed slots this is definitely one of the best – it looks and sounds good (keep the music turned on) and has an interesting take on the standard free spins round.