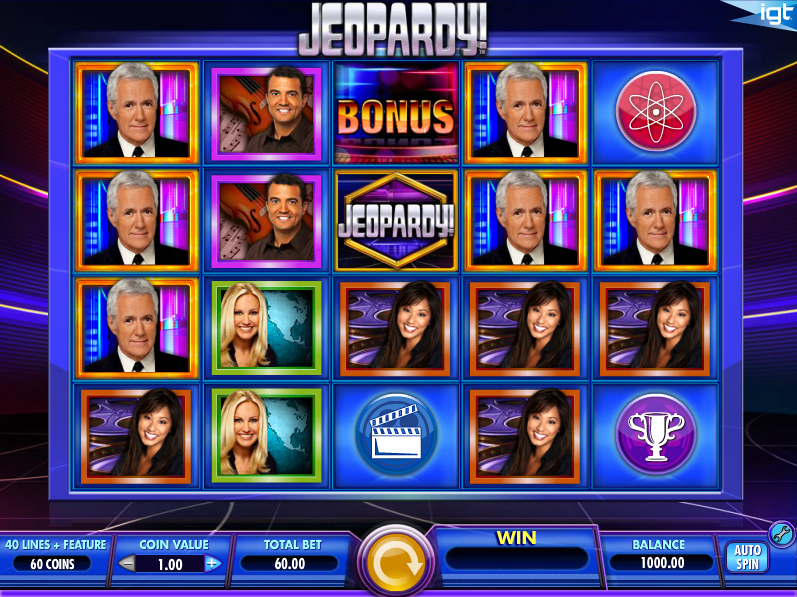 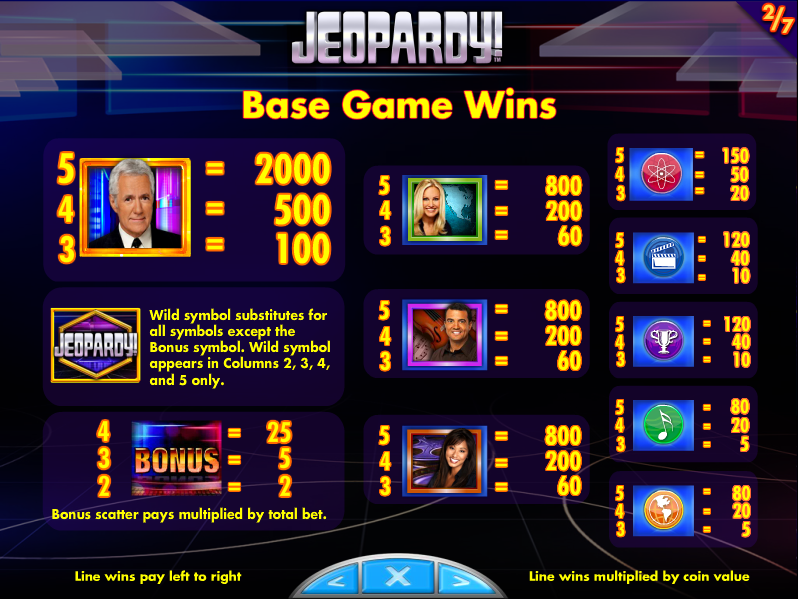 If you’re not particularly familiar with the the quiz show Jeopardy! then you’ve clearly not been paying attention to American television culture. Jeopardy! was very popular in the 1970s and 1980s, still continues to this day and made household names of it’s hosts, Art Fleming and Alex Trebek. IGT have taken the Jeopardy! premise and turned it into an online slot so read on to find out more.

Jeopardy! is a five reel and forty payline slot which assaults your ears ( in the nicest way possible) with the original music. There’s no background scenery here and the four rows of symbols occupy almost all of the screen space.

The main symbols are comprised of category icons and presenters; the icons include symbols for world, music, a sport, film and science. The characters are (we think) Art Fleming, Alex Trebek and two female members of the Clue Crew.

The Jeopardy! symbol is wild and the big ‘Bonus’ is the scatter symbol which activates the main feature and only appears on reel three.

If you can land one of the wild Jeopardy! symbols anywhere on the reels, there’s a chance that more wilds will be spawned immediately below. This is handy because it gives players the opportunity of even more winning combinations. This feature is also active in the free spins round.

Landing two or more of the Bonus scatter symbols anywhere on column three will award you the following:

As you can see from the video above you will get to use the famous Jeopardy board to pick the number of spins & multipliers. The more triggering symbols, the more columns you get to pick – three, four of five respectively.  If you hit the Daily Double space you will be awarded an extra pick.

Columns three and four are harder to reach and will award an extra wild and a completely wild reel respectively.

The bonus feature is definitely the most enjoyable thing about this game and it seems to be where the money is won also. A little extra creativity might have been nice but this is good stuff nonetheless.