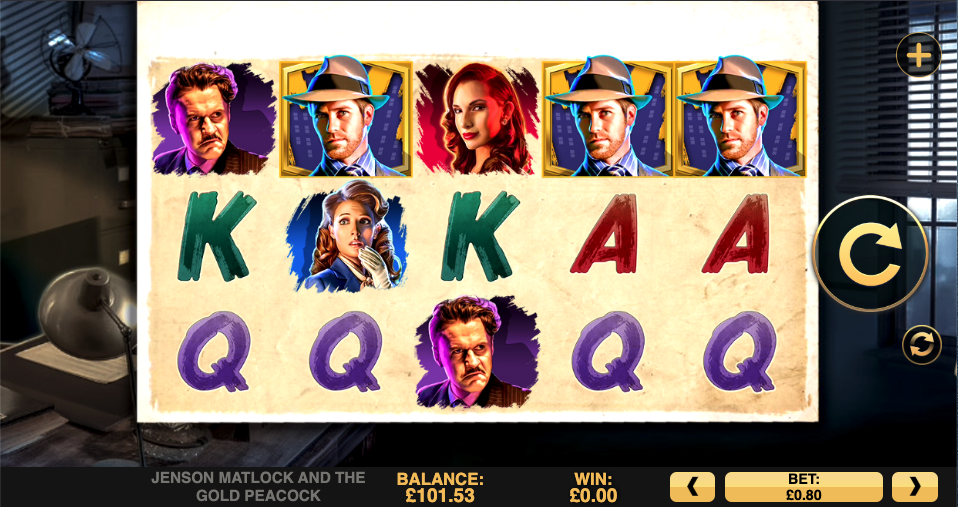 If you’re immersed in the world of online slot machines it must be a great honour to feature in your own game and that’s the case with Jenson Matlock, a former senior employee of High 5 Games and now the hero of this game from that same company – it’s called Jenson Matlock & the Gold Peacock and it offers players free spins and tumbling reels.

Jenson Matlock & the Gold Peacock is a five reel slot with three rows and two hundred and forty three ways to win; we’re taking part in a 1940s crime mystery in which our spy has to protect the diamond-filled peacock from mobsters with the help of his secretary.

The four higher value symbols are the characters from this story including Matlock, his secretary, the ‘foxy redhead’ (according to the publicity material) and the mobster; Q, K and A are the lower values.

The spotlit ‘Wilds’ are wild, they appear on reels two, three and four and they’ll replace all standard symbols to help form winning combinations; the Gole Peacock is the scatter.

Any symbols involved in winning combos will disappear and be replaced by more falling in from above – more wins can then be formed and this process continues until there are no more wins.

Landing three of the Gold Peacocks anywhere on reels two, three and four will award ten free spins; there are no particular enhancements during this round but it can be retriggered in the same manner up to a maximum of sixty spins. The Tumbling Reels are also active during this feature.

Jenson Matlock is typical High 5 fare and it does what it says on the tin with some enjoyable Tumbling Reels and free spins; we like the narrative but it’s the man himself who’ll probably be most pleased with this creation.