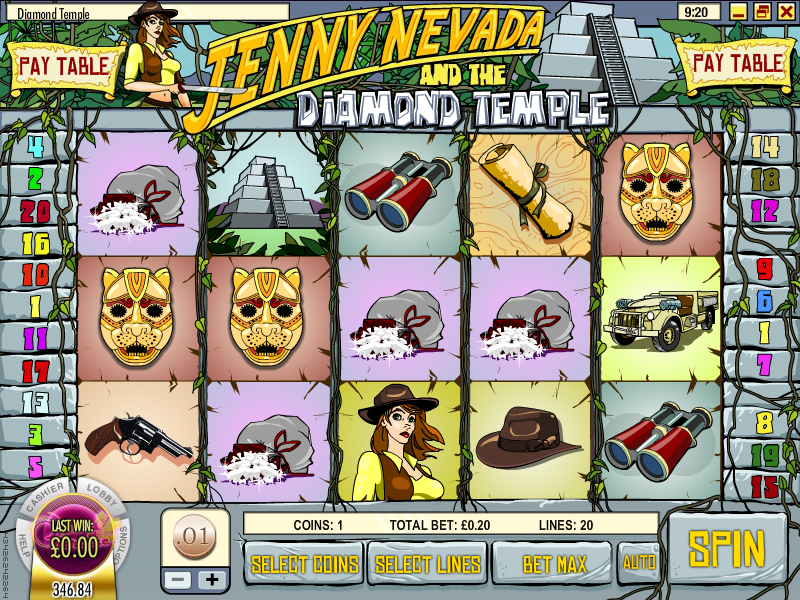 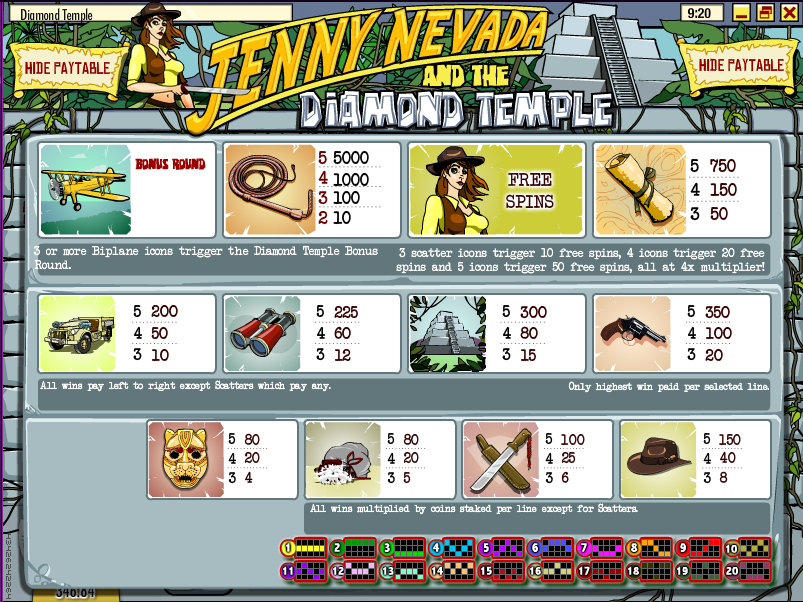 If you’ve seen enough of Lara Croft and are fed up of her globe-trotting adventures then why not try out a new heroine? Jenny Nevada is her name and her target is the Diamond Temple – a pyramid-like structure containing gold and jewels. This online slot is from Rival Gaming so keep reading to find out more.

Jenny Nevada & The Diamond Temple is a five reel slot with up to twenty paylines and you can quickly get to grips with Jenny’s story by watching the intro movie when you first load up the game. The Diamond Temple looms large above the reels which themselves are set into a stone frame.

The main symbols are all related to the theme and include a golden mask, a bag of diamonds, a knife, a hat, a jeep, a pair of binoculars, the temple, a pistol and a rolled up parchment.

Special symbol include the whip which is wild and two scatters – the biplane and Jenny herself – which activate their own features.

Landing three or more of Jenny Nevada anywhere on the reels will reward you with some free spins and you will receive the following:

Any wins landed during the spins will be subject to a 4x multiplier and it’s also possible to re-trigger this feature by landing more Jennys.

This is where jenny gets to enter the temple but to begin with you must land three or more of the yellow biplane scatter symbols anywhere in view.

You will now get to move through various rooms inside the temple, picking up rewarding artefacts on the way. In each room there are several doors to choose from and you will progress to the next one as long as you avoid the booby-trapped door. The further you get, the more the artefacts will be worth.

Everything is triggered by scatter symbols in this game so you will have just as much chance of landing the bonus games no matter how many active paylines you have. Ideal for low rollers but the prizes will be proportionately less.

This is graphically quite basic but it’s still quite good fun with regular but small wins. The biplane bonus round is tough to trigger but the free spins seem to occur quite regularly.