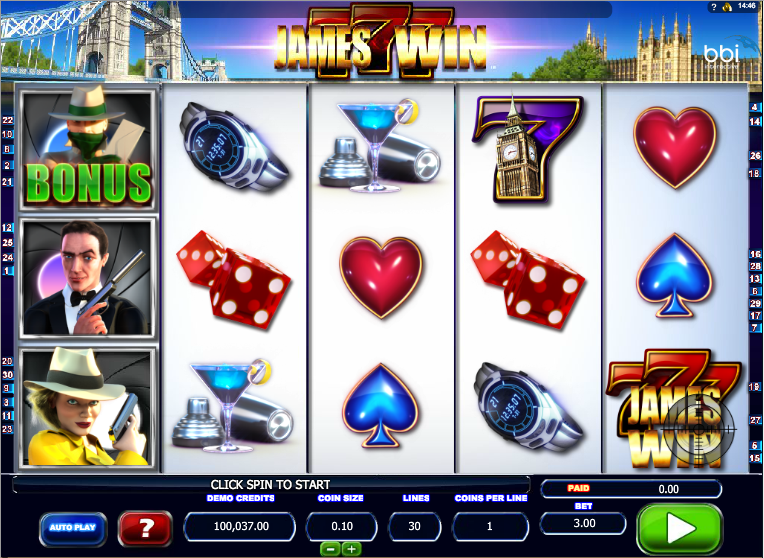 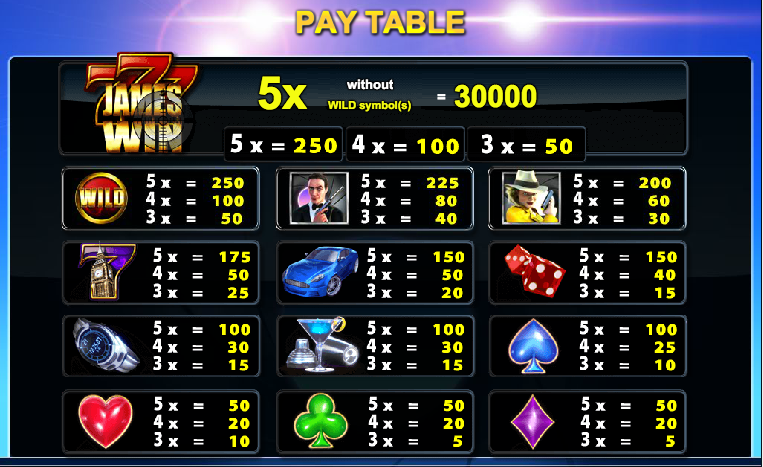 London is in danger and only one man can save it – however it’s not James Bond, it’s a chap called James Win and he struts around the capital with a silenced pistol in one hand a cocktail in the other. There are several bonus features to enjoy in this Bluberi Gaming releases so check out the review below for all the essential details.

James Win is a five reel slot with three rows and thirty fixed paylines; behind those reels there’s a sunny view of London which includes the Housed of Parliament and Tower Bridge, probably the targets of some villainous plot.

There are lots of theme-related symbols including the game’s logo, James Win, the female spy, Big Ben, a blue Aston Martin, a pair of dice, a posh watch and a cocktail set; diamonds, hearts, spades and clubs make up the lower value icons.

The wild symbol is a big gold ‘Wild’ which substitutes for everything except the ‘Bonus’ and ‘Spins’ symbols – they activate their own features.

If you can land the telephone box in all positions on reel three you will see the female spy step out and do something with her phone, after which up to six extra 2x wilds will be added to the reels. The ‘2x’ are added together if they appear in the same winning combo which will increase your winnings.

This is triggered by landing three of the ‘Spins’ scatter symbols anywhere on reels two, three and four; you will now receive 7 free spins and while the Female Spy is active here, it’s not possible to re-trigger the round or to activate the London Chase feature.

Trigger this feature by landing three of the ‘Bonus’ symbols anywhere on reels one, three and five; as you can see from the video above you will now be taken to a screen displaying a board game.

Press the ‘Spin’ button and you will move along the board or land on the next Mission. These missions are picking games where you select, for example, from the windows of a double decker bus or a Beefeater for a cash prize.

Land on a spy symbol and you’ll be whisked straight to the secret room at the end for a guaranteed prize payout.

James Win comes across as a little bit odd but it’s quite good fun and there’s lots of extra bonus games to keep things interesting. We always like to see a bit of London in an online slot so give it a go.