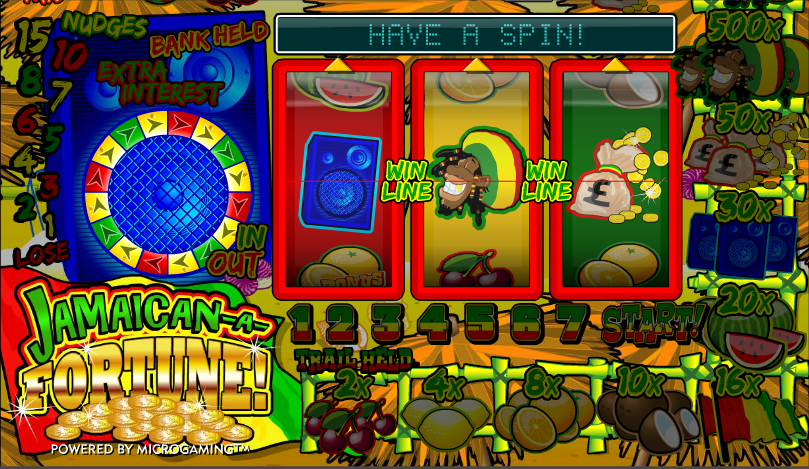 Microgaming do a really nice line in fruit machine-style online slots and we would imagine that these games appeal to a British audience well used to the types of machines you still see dotted around the dark corners of pubs. Jamaican-A-Fortune adds to the genre portfolio with a feature-rich and entertaining game with a suitably Caribbean soundtrack.

Jamaican-A-Fortune has three reels and just the one payline and there’s a great Reggae vibe emanating from the screen when you start to play. Traditional fruity symbols make up the low value spots while theme-related ones such as coconuts, speakers and a Rastafarian are worth more.

When you land a standard win in the base game you’ll have a chance to repeat that win if any of the lights on the speaker to the left of the reels are lit up. The speaker lights will spin and if they land on yellow you win – green and you lose. The lights gradually get switched on as you play the game and filling the wheel up will guarantee a repeat win (or as the game puts it, ‘A Sure Ting‘.

Completing the trail underneath the reels will trigger access to the main feature and the trail is filled by landing symbols with little numbers attached on the payline.

Nudges and holds are usually required to achieve this and there’s also a ‘trail held’ reward to help you out. Some symbols also have a ‘bonus’ tag which will award a random feature designed to help you complete the trail.

During the feature you just have to press the button to stop the flashing light on one of the following options:

Nudges are random awarded and allow the player to nudge down reels in the hope of making a winning combo or collecting trail numbers.

Holds allow the player to freeze one or all of the reels to try and collect numbers or match reels on the next spin.

Most of your efforts should be spent trying to collect those trail numbers so use the nudges and holds to that effect.

This is a very entertaining game with lots of colour, a funky soundtrack and more bonus features than you can shake a stick at – don’t miss it.