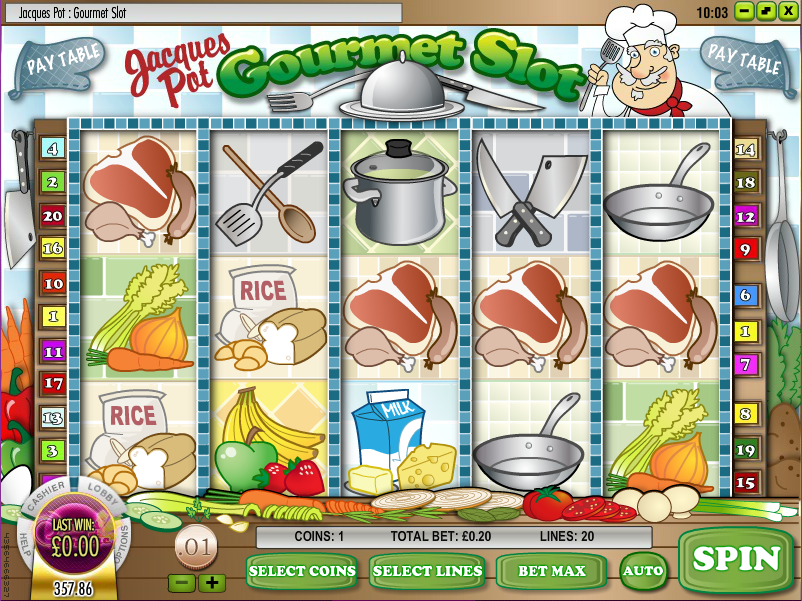 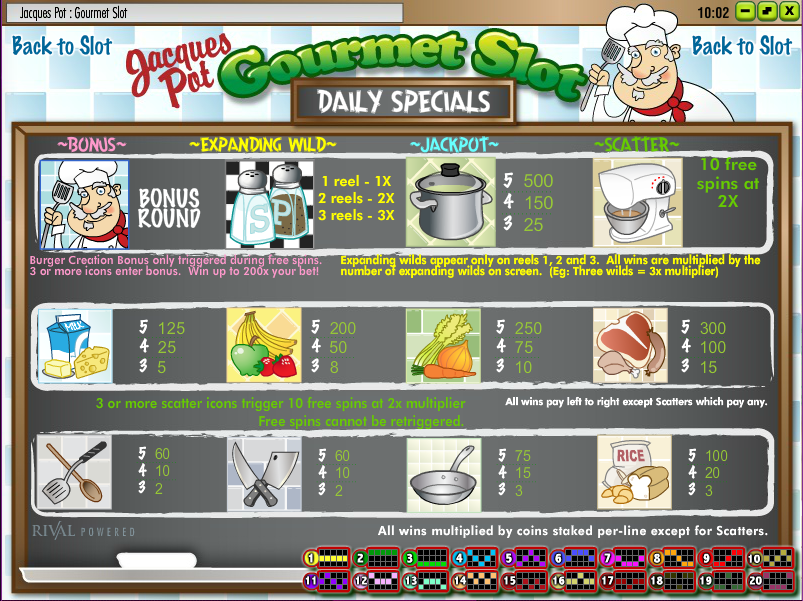 Everybody likes a good pun shoehorned into the title of an online slot and we are delighted to tell you all about Jacques Pot Gourmet Slot. Jacques himself is a chef who clearly likes a chance to spin the reels and he has the ideal name for it. This is a Rival Gaming release so read on to find out more.

Jacques Pot plays out over five reels and up to twenty paylines and despite the main character’s name, this game is all about cooking. It all takes place in a kitchen with various utensils and vegetables visible to either side of the reels.

Not surprisingly all the symbols are kitchen-realted and include bread/rice, a frying pan, knives, utensils, raw meat, vegetables, fruit, chess/milk and a pot which is the most valuable symbol, worth 500x your line stake for five on a payline.

Special symbols include the salt/pepper wild and two scatters – Jacques Pot and the food mixer – which trigger bonus features. The wilds can expand to cover the whole reel if a win is possible but they only appear on reels one, two and three. Two and three wilds in a winning combo will pay 2x and 3x multipliers respectively.

The food mixer scatter symbol is what you need to land to trigger the spins – three or more anywhere in view will do. The reward is ten free spins and everything you win during this round will be doubled.

More importably the free spins round is the only way to trigger the Burger Creation Bonus.

The Jacques symbols only appears during the free spins round and so you will have ten attempts in which to land three of them on the same spin.

Manage that and you will be taken to a screen displaying an empty burger bun; your task is to catch the ingredients as they fall from the top of the screen by moving the bun backwards and forwards across the bottom of the screen. The more you catch the greater the prize with a potential win of 200x your total bet.

Don’t tax yourself too much trying to catch all those ingredients – we suspect that you will win the same amount of coins anyway even if you leave the bun alone.

This is an enjoyable enough game but it is tough to reach the Burger Creation Bonus because you have to go through the free spins round first. Decent wins are quite common in the base game with the help of the expanding wilds.