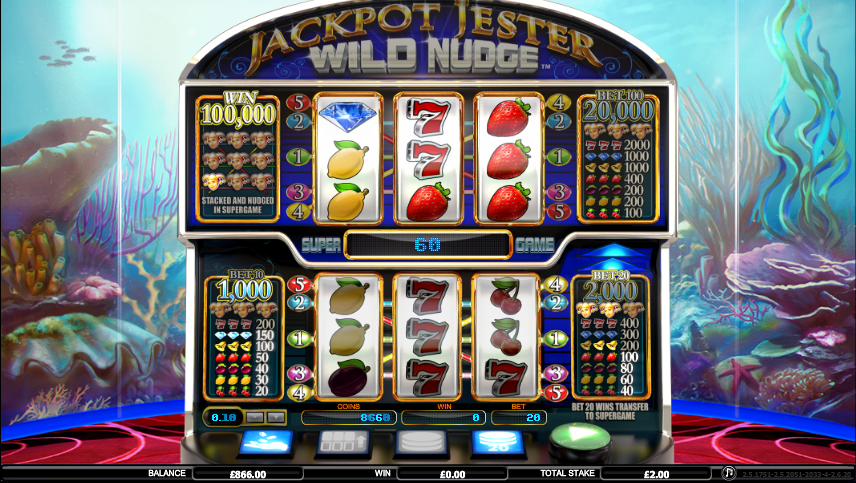 Many online slots fans will be familiar with NextGen Gaming’s classic three reeler, Jackpot Jester 50,000 and now we have the chance to check out the sequel – Jackpot Jester Wild Nudge. It looks a little similar to the original and comes complete with the same Super Game feature but this time there are added stacked symbols and nudges.

Jackpot Jester is a three reel slot with three rows and five paylines (the Super Game reels have the same structure). Rather than a casino setting we are now in sort of carpeted aquarium and lots of little fish can be seen swimming back and forth. A giant clam in the bottom left hand corner opens and shuts occasionally.

The symbols are mostly traditional ones and include sevens, diamonds, bells, strawberries, plums, lemons and cherries; the Jester is the wild symbol which substitutes for all others.

Firstly it’s important to note that you must be betting 20 coins to qualify for access to the Super Game; using 10 coins is not good enough and will also halve all your payouts in the base game.

Each time you land a winning combo in the base game those credits will be automatically transferred to the Super Game bank. You now have three choices:

If you want to dive straight into this feature you must have at least 100 credits in the bank because that’s what each spin costs. Prizes are much bigger however.

The extra feature in Jackpot Jester Wild Nudge is that the wild symbol appears stacked on the Super Game reels; additionally if just a part of a stack of wilds appears, the whole stack will be nudged into view for some extra winning options. Filling all positions with wilds awards the jackpot of 100,000 coins.

Jackpot Jester Wild Nudge is essentially a poshed-up version of the original with an added feature; however it’s definitely good fun and the Super Game feature never gets boring. Classic slots fans should be impressed.