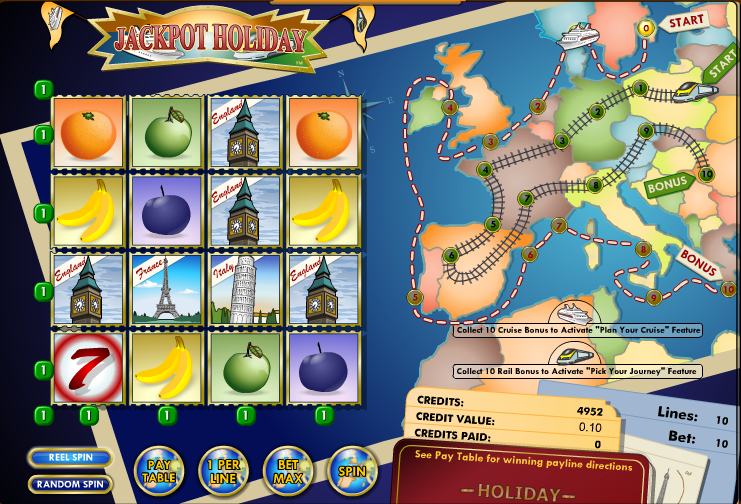 Some online slots veer so far from the norm that they become an arcade game rather than a traditional reel spinner. Jackpot Holiday is one such game – it’s from Amaya Gaming and regular players may well see a similarity between this releases and Amazon Adventure from the same developer. It’s theme is European travel so read on to find out more about this entertaining game.

Jackpot Holiday takes place on a 4 x 4 grid and to the right of that grid you can see a map of Europe on which are laid out two routes – one by boat and one by train. This all relates to the bonus games but more of that below.

The reels are spun in one of two ways; you can choose can spin them in the traditional manner or you can select the ‘Random Spin’ button and have them move in a random way.

The symbols on the reels are a mixture of traditional ones such as cherries, oranges and sevens and then some theme-related ones such as windmills, Big Ben, the Eiffel Tower and the Leaning Tower of Piza. The Jackpot symbol will win you 2500x your line stake for four in a row.

Bonus symbols are a cruise ship and a train and these are key to moving around the map. The sevens also act as the scatter symbols and landing five to fifteen anywhere on the reels pat a scatter bonus award.

Each time you land the cruise ship or the train on the reels, the matching icon will move along it’s route on the map of Europe. Once one of them reaches it’s destination the bonus game begins.

This is quite an entertaining diversion and although the bonus features are a little unimaginative, they are at least guaranteed. Stupid people will be relieved to see that each landmark has a helpful label attached showing which country it’s in.