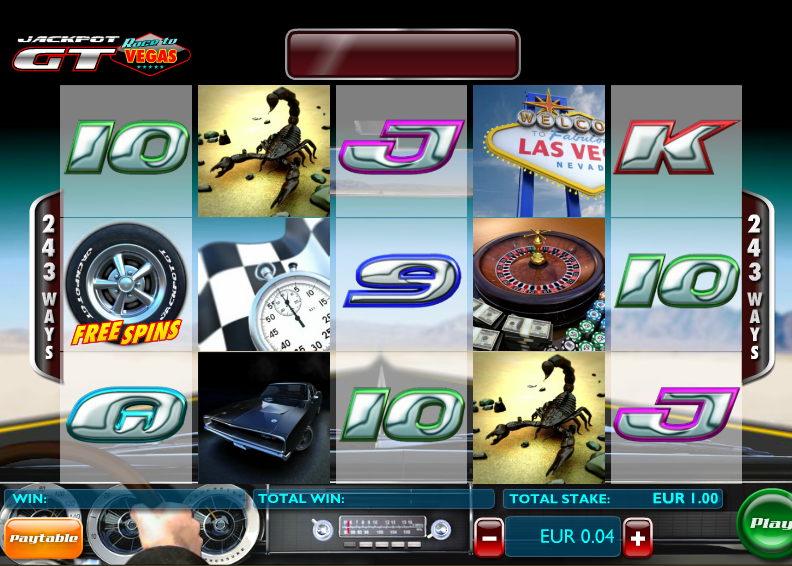 If you watch the intro movie to this online slot from Ash Gaming, you may well notice a touch of the Grand Theft Auto’s about the opening sequences; the similarities don’t end there because Jackpot Gt Race To Vegas is a game about driving which features several bonus features, a funky soundtrack and  Las Vegas as it’s ultimate destination.

Jackpot GT is a five reel and 243 payline game, although the developers point out that there aren’t really any paylines and that the 243 ways to win mean that you’ll win as long as matching symbols are on subsequent reels. Those reels are set on the windscreen of our car as we speed along the desert road towards the hills (and Vegas) in the distance.

A variety of symbols entertain us on our journey and include a scorpion, a chequered flag and stopwatch, a roulette table, our hero’s car and the Las Vegas city sign. 9, 10, J, Q, K and A are the minor symbols.

The good news is that the Jackpot GT wild symbols are stacked which means more than one can appear on a reel in the same spin; this means that your winning chances are increased.

Along the way there are different coloured bonuses to collect – red = cash, blue = extra time, green = mystery award – so you need to steer you car to grab them.  Choose ‘Auto Race’ if you’d prefer to just sit and watch.

If you make it to Vegas you’ll meet your girlfriend and you’ll get to play one spin on a Sevens slot machine.  This is where you can win the progressive jackpot by landing three gold sevens.

Landing the free spins wheel on reel one, three and five will reward you with ten free spins.  While the spins are in progress an extra row will be added to the reels which means there are now 1024 ways to win and who could argue with that.

Loads of bonus features make this high speed slot a real favourite of ours and we especially like the attention to detail throughout this slot – for example watch the hands on the steering wheel in the bottom left hand corner.  The chance to win the progressive jackpot is the icing on the cake.