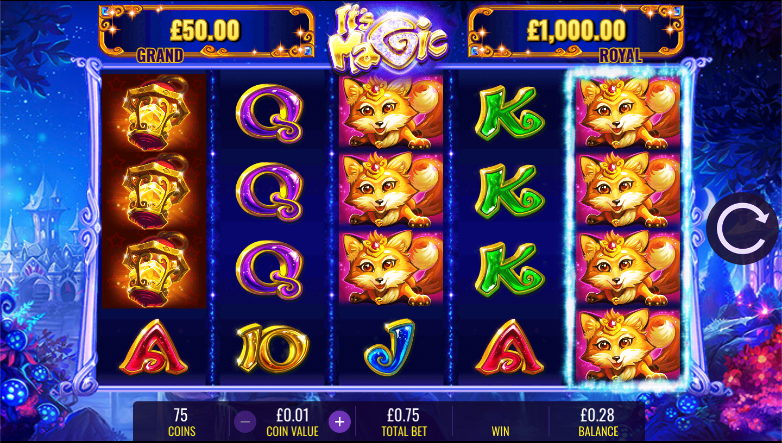 A world of illusion and sparkling lights awaits those players willing to take a punt on this colourful online slot machine from IGT; simply titled It’s Magic, it offers a top hat-full of free spins plus a jackpot prize worth up to £100,000.

It’s Magic is a five reel slot with four rows and fifty fixed paylines; there’s some enchanting music to complement the gameplay which takes place on a set of reels floating in front of a backdrop containing mystery plants and a fantasy castle.

The higher value symbols include the girl, a spellbook, a treasure box, an orb, a cat, a monkey and a fox; 10, J, Q, K and A represent the lower values.

The wild is created by landing a stack of one symbol in all positions on a reel – it will turn completely wild for the next spin. It will replace all others except the game’s logo bonus symbol to create winning combos.

This is triggered by landing at least three of the It’s Magic bonus symbols anywhere in view; as they can appear stacked it’s possible to land a maximum of twenty bonus symbols in one spin. Essentially you’ll get ten free spins for three bonus symbols then an extra two spins per symbol until you get to eighteen+ at which point it’s a hefty forty five free spins.

More spins can be won during this round up to a maximum of 300.

This can be triggered randomly on any non-winning spin in the base game and you’ll get one spin of the Magic Wheel; this can award a cash prize or the Royal and Grand jackpots shown above the reels. Those values are relative to your stake and range from £50 to £100,000 at a maximum stake of £150 per spin.

It’s Magic is a slot very much in the IGT style in terms of its look and gameplay; it comes with a little more in the way of bonus features than some other games and the sound and colour add some welcome distraction. There’s a slightly low RTP of 94.18%.