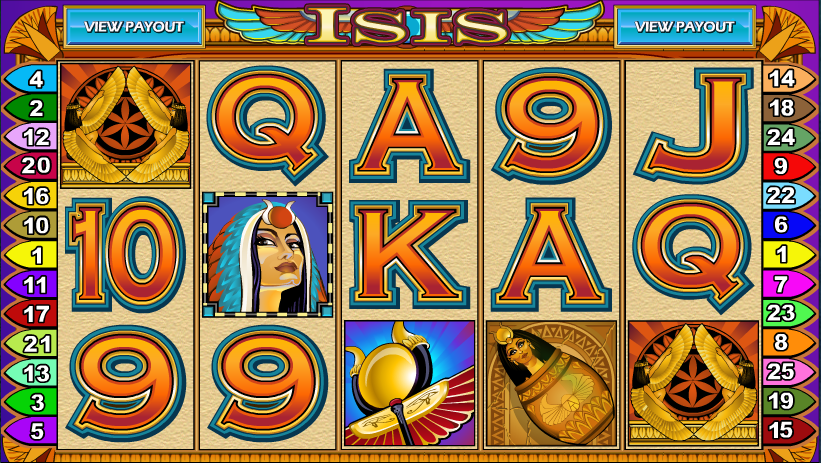 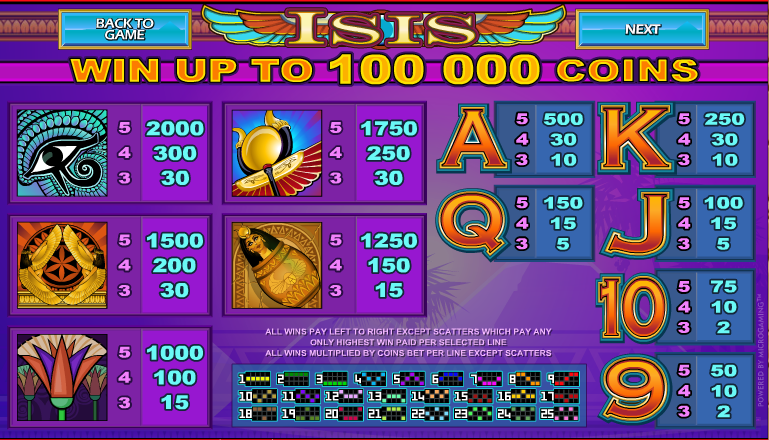 Online slots based on ancient Egypt can be found under every nook and cranny; we’ve reviewed loads of them in the past from a wide variety of software developers and here’s one more from Microgaming. Isis is big, colourful game with some admittedly nice graphics, a bonus game and a handy gamble feature for those who like to stretch their luck a little further.

Isis plays out over five reels and twenty five paylines; it’s a big, bold game and the reels are set in an ornately decorated frame with nods towards the character of Isis, the goddess of magic and nature.

Some big, orange playing card symbols are used as the lower value symbols but there’s the usual selection of Egyptian pictures further up the scale and these include Isis’ staff, a sarcophagus and several decorative images related to the theme.

The wild is represented by Isis herself and if she contributes to a winning combination that win will be doubled; the hawk is the scatter symbol and it activates the main feature.

At least twenty free spins are available for players who can land at least three of the hawk scatter symbols anywhere on the reels; the following table provides more information:

The feature can be re-triggered by landing three more scatters again and every win you land is subject to a 6x multiplier.

Wager your most recent win on a turn of the card by pressing the ‘Gamble’ button underneath the reels; you can double or quadruple your win by correctly picking the right colour or suit respectively. Get it wrong and you lose all you winnings.

The free spins are the focus here because of the unusually high 6x multiplier; that’s obtainable whether you’re playing with one payline or twenty five so low rollers have the same chance of triggering it.

This is a nice-looking slot which appears a little dated now but it’s colourful enough to cheer you up on a dull day. The downside is that the feature seems hard to trigger.