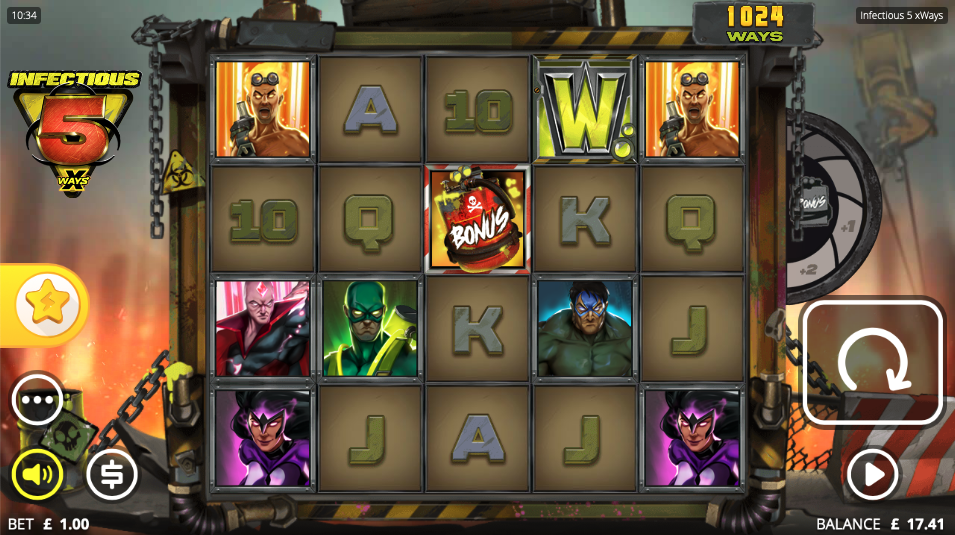 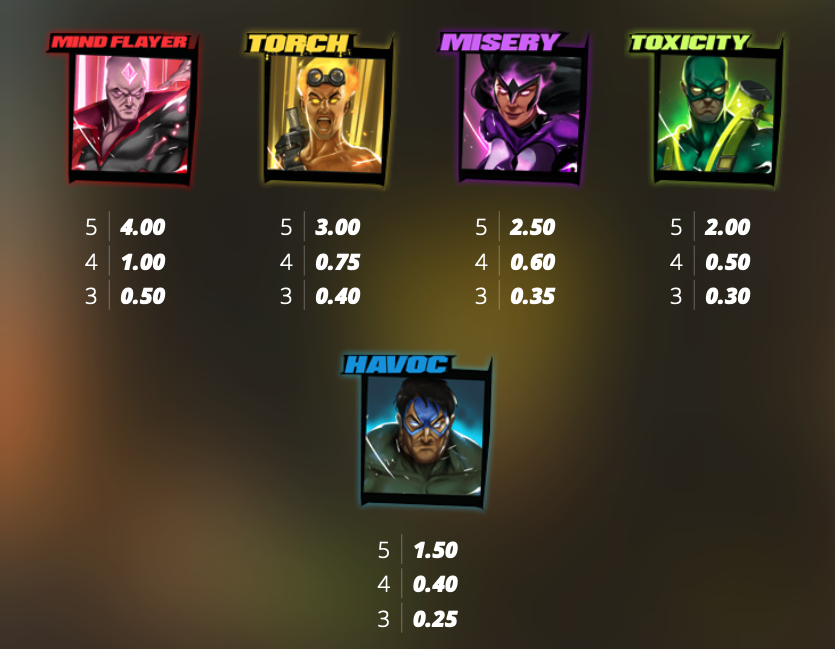 When you encounter an online slot with characters called Mind Flayer and Misery you know it’s going to be a little bit different – this particular reel spinner comes with the title of Infectious 5 xWays, it’s developed by Nolimit City with four different bonus features and the classic xWays gameplay mechanic.

Infectious 5 xWays is a five reel slot with 1024 ways to win initially but this can increase to 110,592 when the bonuses kick in; the narrative is one of superheroes becoming toxic villains and the backdrop contains the flames and detritus of a wrecked laboratory.

The five high value symbols are the characters from this story – Mind Flayer, Torch, Misery, Toxicity and Havoc; 10, J, Q, K and A are the lower values; the large ‘W’ is wild and the special symbols are the toxic, red barrels and the xWays icons.

During gameplay any xWays symbols landing will transform into regular symbols two or three positions high – the reel height will increase accordingly.

Infectious xWays are activated when xWays and wild symbols land on the same spin – the symbol revealed by the xWays symbol will infect matching symbols in view which will also expand and increase the reel heights.

Landing three or four of the red bonus barrels will trigger the Infectious Spins while five barrels will activate the Mayhem Mode.

The player can choose between the following two options:

Five bonus barrels will get you here and you can also trigger this by collecting five barrels during one of the above features; in this version wilds still land on reels two, three and four but all characters transform into one golden golden supervillain, making wins much more likely.

Nolimit City slots are always action packed with lots of clever bonus features and Infectious 5 xWays is no exception; we’re not 100% sure what the story is here but it’s colourful and fast-moving and it should keep you coming back for more spins.

Infectious 5 xWays is a crime-themed video slot from Nolimit City with five reels and 243 ways to win.

The Return To Player percentage for Infectious 5 xWays ranges from 96.2.

How To Win On Infectious 5 xWays?

Where can I play Infectious 5 xWays?