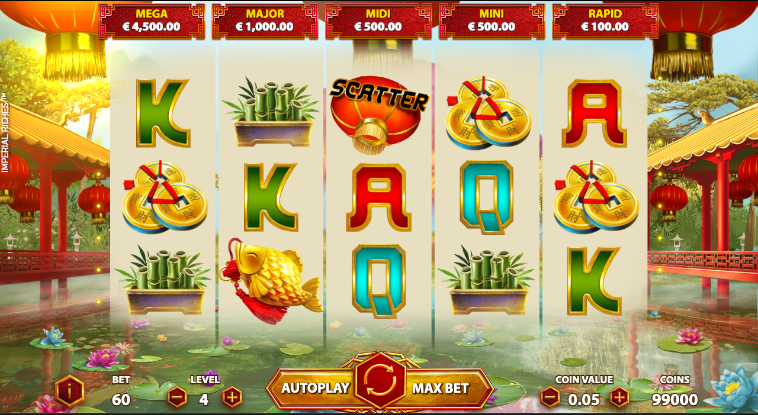 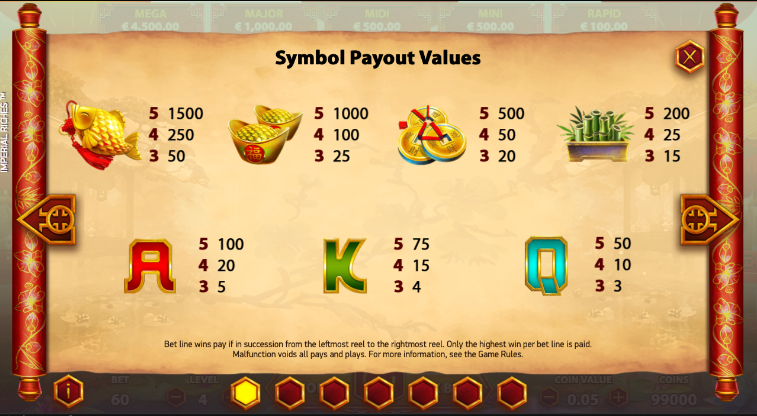 Calm, lily covered ponds and Chinese lanterns can only mean that we are once again heading east, this time to check out an online slot called Imperial Riches from Net Entertainment; as well as Avalanche Reels and free spins it tempts us with three tasty progressive jackpot prizes.

Imperial Riches is a five reel slot with three rows and fifteen fixed paylines; Chinese lanterns float in the background as traditional music accompanies your gameplay with symbols floating just above the reflective Koi pond.

The most valuable symbols include the goldfish, the gold ingots, the gold coins and the sprigs of bamboo; Q, K and A represent the lower values.

The gong is wild, it appears only on reels two, three and four and it will replace all standard symbols to help make winning matches; the lantern is the scatter symbol.

Always a popular feature, any symbols in winning combinations will disappear and be replaced by more falling in from above to fill up the spaces; more combos can then be formed and the process continues.

This is triggered by landing three of the gong scatter symbols anywhere in view and you’ll receive an initial ten free spins although five more are awarded for each additional scatter.

During this round any winning symbols become ‘jewels’ and drop down into the pond – if they are eaten by the fish a prize of 5x, 10x or 15x the stake is awarded. If three jewels are eaten by the end of the round the Jackpot Game is triggered and here there’s one of five prizes to be won, two fixed jackpots and three progressive jackpots.

Imperial Riches is a classy trip to an ancient empire in which the Avalanche Reels amd the progressive jackpots are the icing on an oriental-themed slot cake, if you can forgive the strangled metaphor – whatever, it’s good fun and there are some big wins available in the features.