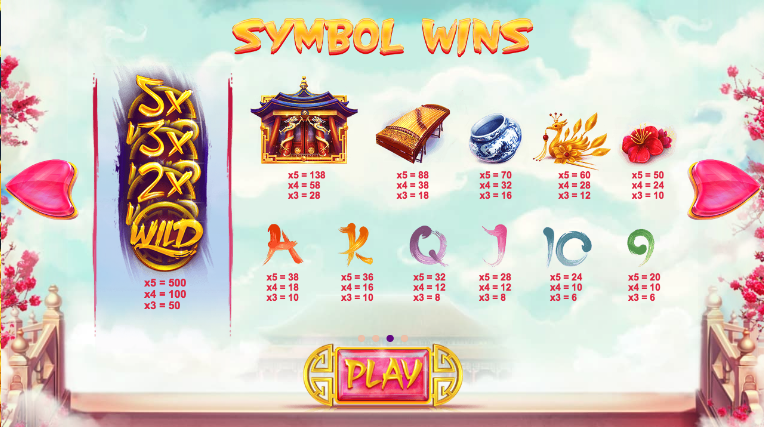 The mysterious Orient is once more our destination as we check out this regal online slot from Red Tiger Gaming; it’s called Imperial Palace, it comes with two separate bonus features and a tasty progressive jackpot.

Imperial Palace is a five reel slot with three rows and twenty fixed paylines; those reels spin on the walls of this opulent building while blossom trees emerge from either side. The progressive jackpot values are listed on the left hand side.

The theme related symbols include the palace, a stringed instrument, an ornate vase, a golden bird and a red flower; 9, 10, J, Q, K and A make up the lower values.

The wild symbol is a big gold ‘Wild’ which is added randomly to the reels by a paintbrush and occupies that entire reel; more than one reels can be turned wild in this manner on any spin. Wilds will substitute for all others to form winning combos except for the Free Spins bonus symbol.

This is triggered by landing the Free Spins bonus symbol anywhere on reels one, three and five and initially you will be asked to pick one of the icons to reveal the number of spins awarded.

During this round the wilds are added to the reels as in the base game but here they can come with a win multiplier of up to 5x.

Imperial Palace is a great looking slot with a basic wild feature which is activates regularly; chuck in a free spins round and a progressive jackpot and this is one to check out – it comes with an RTP of 95.31%.