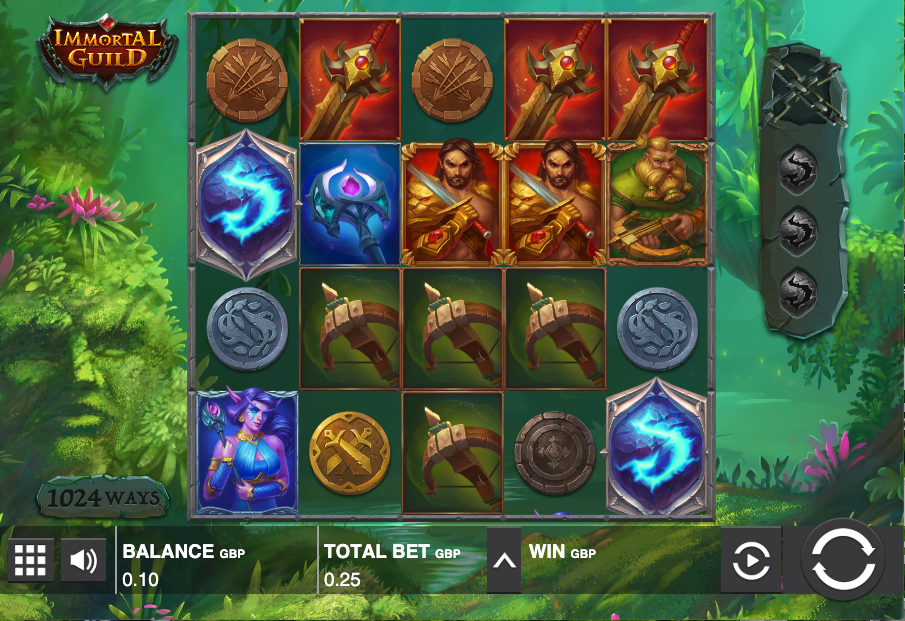 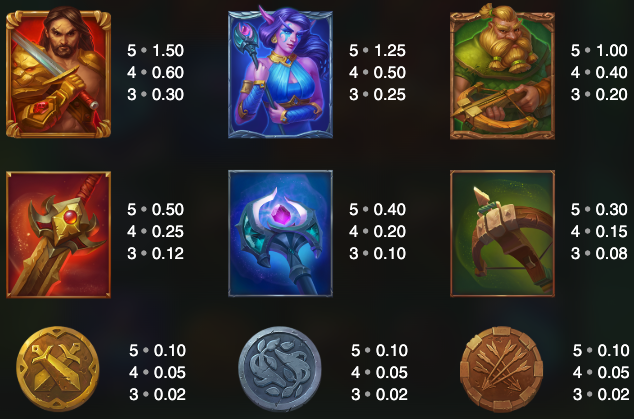 Immortal Guild is a five reel slot with four rows and 1024 ways to win which means there’s no payline structure and wins are formed as long as there are matching symbols in adjacent reels starting from the left hand side. Those reels float in front of a steamy forest setting where ancient statues have been long covered by rampant undergrowth.

The higher value symbols include the three characters (warrior, mage and hunter) from this epic saga along with their three weapons while the lower values are represented by coins in gold, silver, bronze and wood.

The wild is a sort of golden mask which only appears during the free spins and only in certain circumstances which we’ll explain below – it will replace all standard symbols to help form winning combos. The blue Immortal Stone is the scatter symbol and key to the main feature.

This is a little different from the usual collapsing reels feature to which we’re accustomed – if any of the three character symbols appear stacked on the reels they’ll collapse down and form a multiplier worth the number in the stack. You’ll then get a respin with that symbol(s) held in place to try and make winning combo with a multiplier.

This is triggered by landing three of the Immortal Stone scatter symbols anywhere on reels one, three and five; you’ll receive an initial seven free spins with one extra awarded for each scatter landing during this round.

The Collapsing Reels continue to be active but this time they’ll convert into a wild symbol also to be bit more helpful during the subsequent respin.

Immortal Guild is a typically high quality and creative slot from Push Gaming and this time it offers players a slightly different type of collapsing reel plus a free spins round which integrates that feature very well. Check it out!