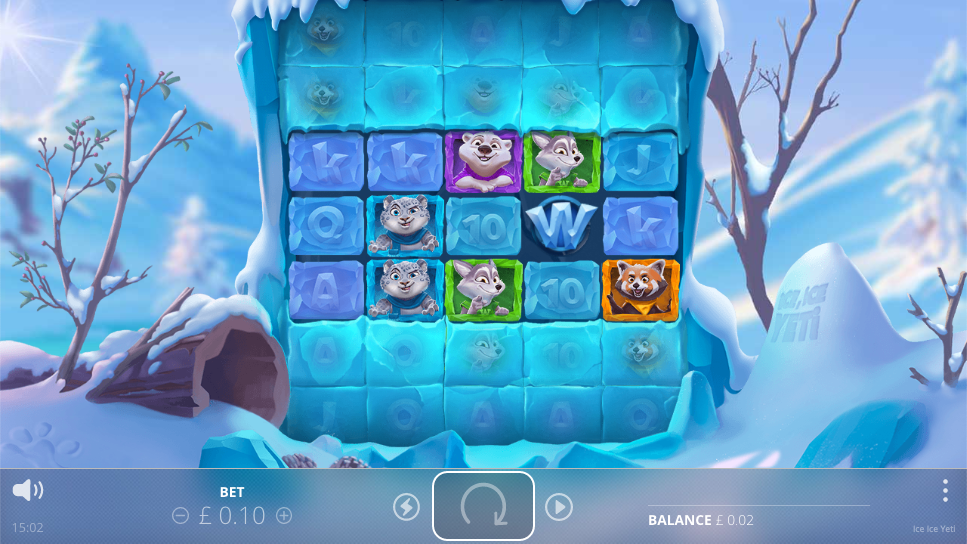 In the snowy wastes of some chilly, mountainous country lives the legendary Yeti, so rare that only conspiracy theorists have ever seen him but the good news is that he’s also the theme of this online slot machine from Nolimit City called Ice Ice Yeti which comes with clever ice-themed bonus features.

Ice Ice Yeti is a five reel slot with three rows intially but the bonus gameplay means there’s a potential 16807 ways to win once those reels have been fully expanded; to begin with those extra reels above and below are frozen against a snowy backdrop.

Four ‘rascals’ represent the the higher value symbols and they are little furry animals differentiated by colour – orange, purple, green and blue; the lower values are the standard 10, J, Q, K and A but they are encased in ice to begin with.

The Yeti is wild and he’ll trigger the main feature as well as replacing other symbols to help form winning combos; there is no bonus symbols in this game.

This can occur randomly on any spin, the reels will shake and up to ten frozen positions will crack and become uncovered, adding to the reel positions in play.

This is triggered by landing at least one wild Yeti symbol anywhere in view and he’ll now crack up to three extra reel positions; if there’s a winning combination then those symbols will freeze in place and the reels will spin again – any symbols or Yetis which add to the combo will trigger another spin and this continues until no new symbols are added at which point the payout is calculated.

Ice Ice Yeti uses a clever gameplay mechanic to add something a little different to this slot experience; it keeps the gameplay flowing and adds to the replay value of this high quality release.