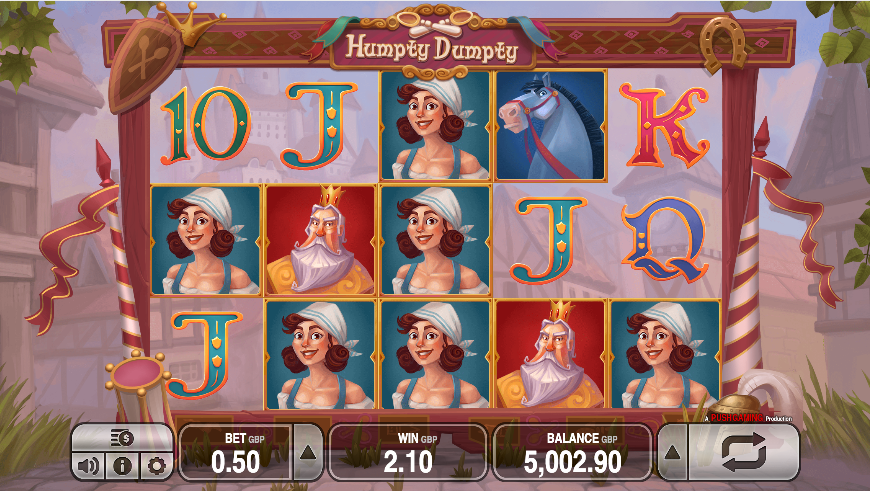 Humpty Dumpty is one of the more famous English nursery rhymes, dating back well over 200 years. It’s original meaning appears to be unclear but that hasn’t stopped it being linked with a number of historical events such as the 1648 siege of Colchester. Now we’ve got an online slot to play which is developed by Push Gaming and includes some creative bonus features – it’s all described in more detail below.

Humpty Dumpty is a five reel slot with three rows and twenty five fixed paylines; it’s a medieval design with some contemporary buildings in the background and a sunny sort of disposition.

There are five theme-related symbol sand these include the King, the Queen, the soldier, the horse and the girl; 10, J, Q, K and A make up the lower values.

The wild symbol is a crossed pair of teaspoons on a gold background and it substitutes for all others except the Humpty Dumpty icon and the heart.

Humpty Dumpty is an expanded symbol which appears on reel three and if he fills all positions you will trigger this round. Initially you will receive six free spins but you will notice that there are three heart-shaped spaces above reels two, three and four.

will fill up one of the spaces above; when all three spaces above one are filled then that reel will become completely wild for the rest of the spins. The best outcome of course is to for all three reels to be wild.

If a single wild appears on the reels you will be paid for any wins and then the symbols will move down one place and any more wins awarded. This process continues until there are no more single wilds on the reels – you can see it in action in the video above.

Humpty Dumpty is a nice-looking game which includes a couple of features we’ve not seen before and that’s always a good thing; That feature also seems easy to trigger and the game comes with an RTP of 96.47%.