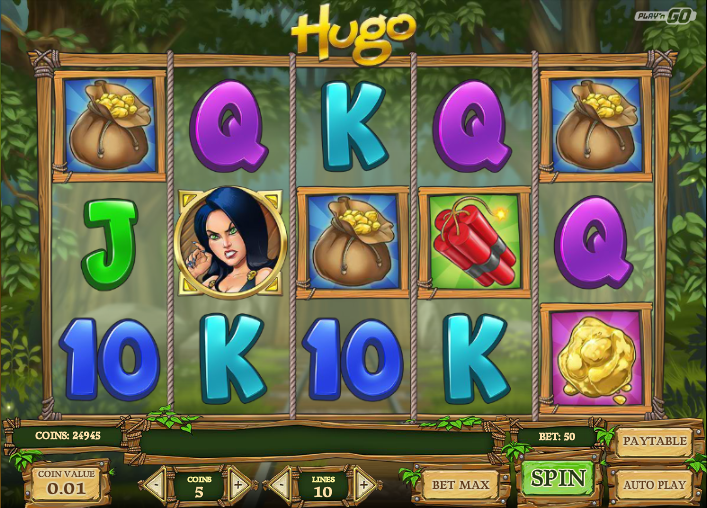 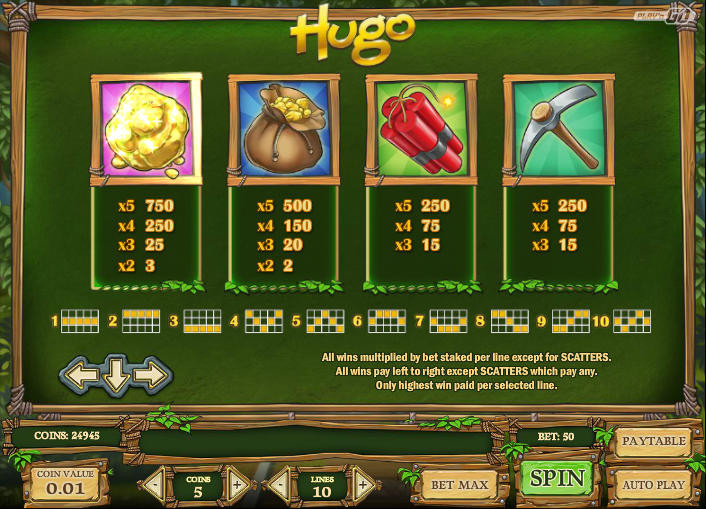 Way back in 1990 a Danish television company created a character called Hugo the Troll and he’s a little chap who’s gone on to be the star of numerous shows, magazines and video games ever since. Play N Go have now released an online slot based on this character and it’s called simply Hugo – it comes with two separate bonus features and it’s all described in more detail below.

Hugo is a five reel slot with three rows and up to ten paylines; Hugo pops out to have a quick word as the game begins and then you’re ready to play on a wooden set of reels set against a backdrop of trees and undergrowth. There’s also some nice music to keep your gameplay ticking along.

The four high value symbols are Hugo’s mining equipment including a gold nugget, a bag of gold, some sticks of explosive and a pickaxe; lower values are the standard 10, J, Q, K and A.

Hugo himself is the wild symbol and he’ll substitute for all others except the scatter (Scylla the witch) and the bonus treasure chest icons.

This is triggered by landing three of the Scylla scatter symbols anywhere in view and you will now get to choose one of three options:

Landing three more scatter symbols will award the number of spins you chose the first time. During this round there’s an extra Hugo scatter which can appear stacked on all reels.

This is a picking round triggered by landing three of the treasure chest bonus symbols anywhere on reels one, three and five. Your now get to work your way through several levels of the gold mine to find the treasure chests. Each successful pick wins money and progression but if you come across Don Croco the round is over.

While we’re not too familiar with Hugo the character, Play N Go have created an eminently playable slot with some nice graphics and animations and two interesting bonus feature; it comes with an RTP of 96.40%.