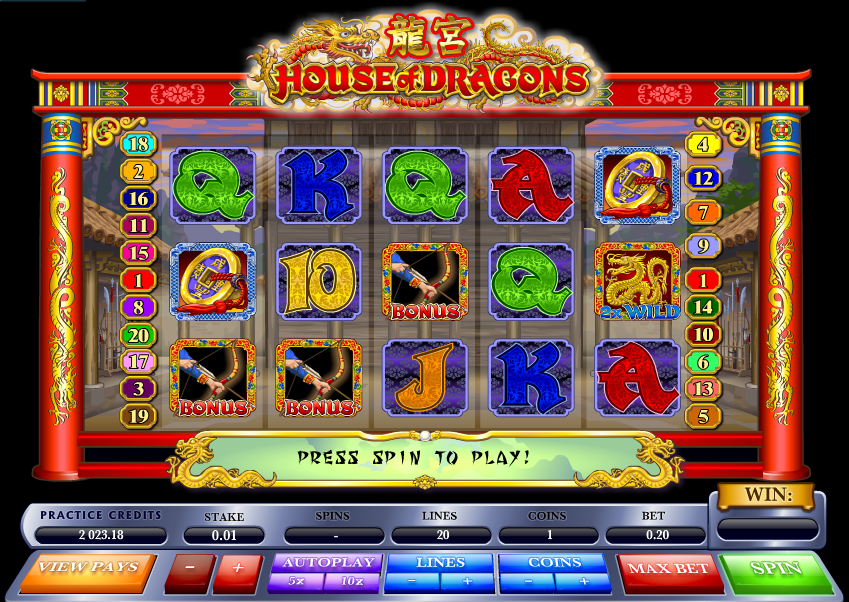 House of Dragons brings to mind many of those things that slots fans of a certain age will remember about Chinese culture – or at least what we thin of as Chinese culture.  It’s set in the traditional courtyard dwelling, there’s ornamental dragons aplenty and there’s a gentle oriental soundtrack to accompany your gameplay.

This online slot from Microgaming contains five reels and twenty paylines and the reels are set within pillars decorated with dragons; spin those reels and you’ll be entertained with a selection of jokey mock-Chinese phrases such as ‘wok on the wild side’ and ‘I wok the line’.

The low value symbols are represented by playing cards while the high value ones are all Chinese and so we have a Chinese coin, a fan, a traditional archer and a red lantern.  The archer is the bonus symbol and there are two wild symbols – the golden dragon and the emperor.  The fan acts as the scatter symbol.

Landing three or more of the fan scatter symbols awards an automatic bonus in which each each fan will be turned over in turn to reveal a possible win and a multiplier.  Of course you may not win anything but it’s a bonus which seems to get triggered quite regularly.

This is the main bonus game and to trigger it you’ll need to land three or more of the archer bonus symbols on an active payline.  It’s more of a gambling game and as you can see from the video below you will be asked to either gamble your line win or collect it.

If you opt to gamble you should pick one of the four targets on the screen with each offering a different reward; the archer will now take aim hopefully hit that target – miss it and you’ll lose the bet and the prize money.

If you can land the Dragon wild symbol as part of a winning combination then that prize will be subject to a 2x multiplier.

Although the graphics may not be state of the art, this is an engaging slot with some inventive bonus features.  The Chinese atmosphere is nicely set up and that’s complemented by the relaxing music.