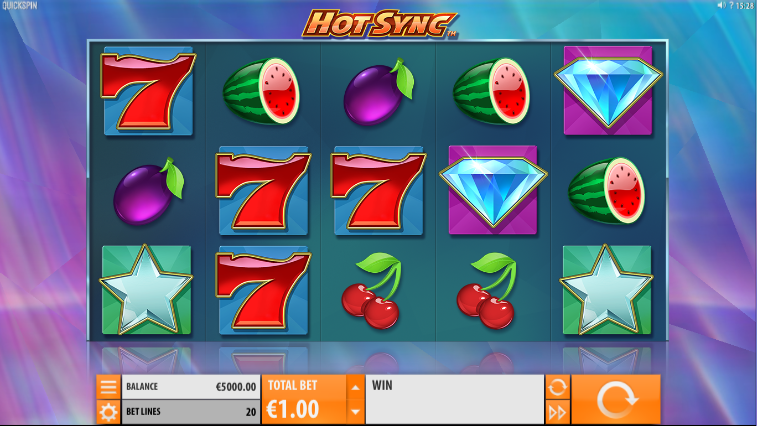 Some online slots look simple but pack a creative punch which should satisfy most players; Hot Sync is one such game, it’s been developed in the studios of Quickspin and straight lines and basic graphics are complemented by two interesting bonus features – read all about it below.

Hot Sync is a five reel slot with three rows and twenty fixed paylines; those reels spin within a basic frame and there’s a relaxed electronic soundtrack to accompany your gameplay.

All the symbols are of a traditional nature and include blue diamonds, red sevens, stars and bells; there’s a veritable fruit salad of lower value icons including watermelons, plums, lemons and cherries.

The wild symbol is a big gold ‘Wild’ which will replace all others to form winning combos except for the Bonus and Hot Sync Wild icons.

This is an interesting feature and it’s triggered by landing two or more Hot Sync Wild symbols anywhere in view. The reels containing these symbols will now become ‘hot’ which means they will contain extra wilds for one respin; additionally those hot reels will be identical when they stop spinning. Extra spins will be awarded until no more additional Hot Sync Wild symbols appear on the reels.

This is triggered by landing three of the ‘bonus game’ scatter symbols anywhere on reels two, three and four; you will be awarded eight free spins during which any Hot Sync Wild symbols will turn that reel hot for the remaining spins. You can’t trigger any more spins from within this feature.

Hot Sync is a really enjoyable and fast-moving slot with some crisp graphics and entertaining bonus features; leave the music on, sit back and enjoy the gameplay which comes with an RTP of 96.29%.