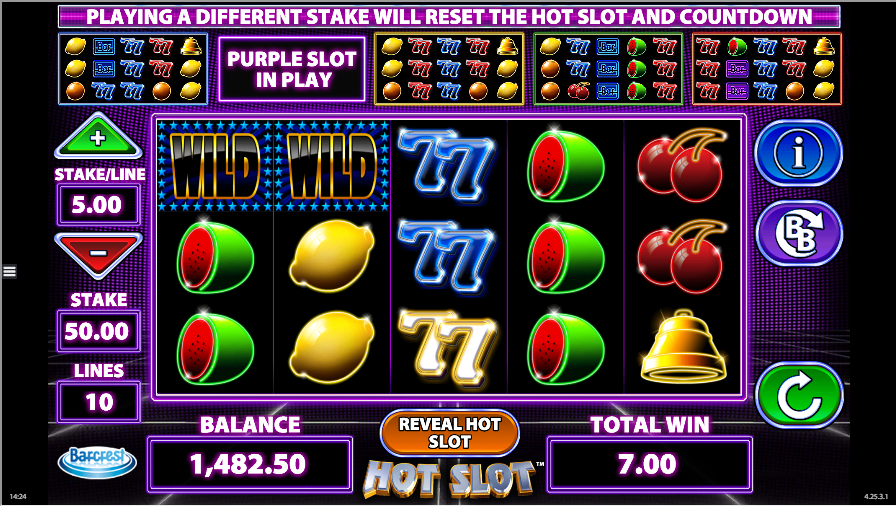 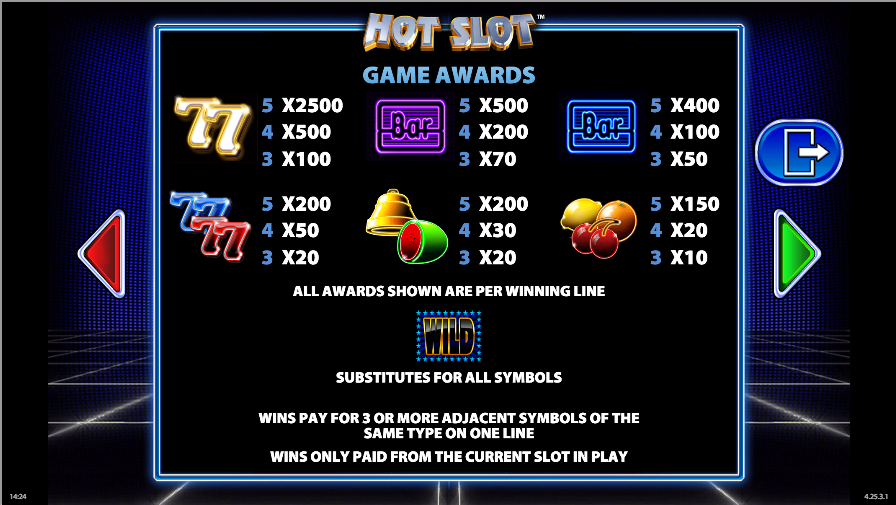 Barcrest online slots can usually be distinguished by their idiosyncratic designs and if you’ve played one then you’ll be able to spot another at fifty paces. However that doesn’t mean that the gameplay is necessarily the same and we’ve found in general that Barcrest games offer some very creative feature. That’s certainly the case with Hot Slot and you can read all about it below.

Hot Slot is a five reel game with three rows and ten fixed paylines; it’s all very colourful and designed in neon on a black background; at first you may be a little baffled about the five separate reel sets at the top of the screen but we will explain this in full below.

The symbols are all very glossy but traditional at the same time and include blue, red and yellow sevens, purple and blue Bars, bells, watermelons, lemons, oranges and cherries.

The wild symbol is a big gold ‘Wild’ surrounded by blue stars and it substitutes for all others; winning combos don’t have to start from the left hand side as long as there are at least three on a paylines.

Load up the game and you’ll see those five reel sets at the top; you can choose to play with any one of them and that one could be the Hot Slot – paying more than 100% RTP. You’ll never find out if you picked the right one but after each spin the reels are ranked in terms of their payout (which may not be the same as the Hot Slot).

Each Hot Slot game lasts for the duration of the countdown meter above those five reels but if you choose to swap your choice, the Hot Slot will reset, as will the countdown.

Barcrest uses this Big Bet feature on several of it’s games and on this one it gives you the chance to pay a bit more for five enhanced spins and there are two available:

Hot Slot is a typical Barcrest release and it’s an ingenious idea to select the reels in the hope of picking the high payer; the RTP of course remains the same over a given period of time though so bear that in mind.