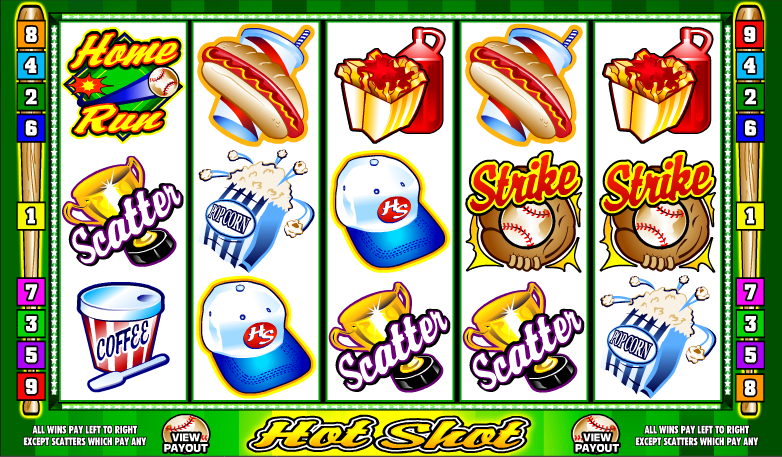 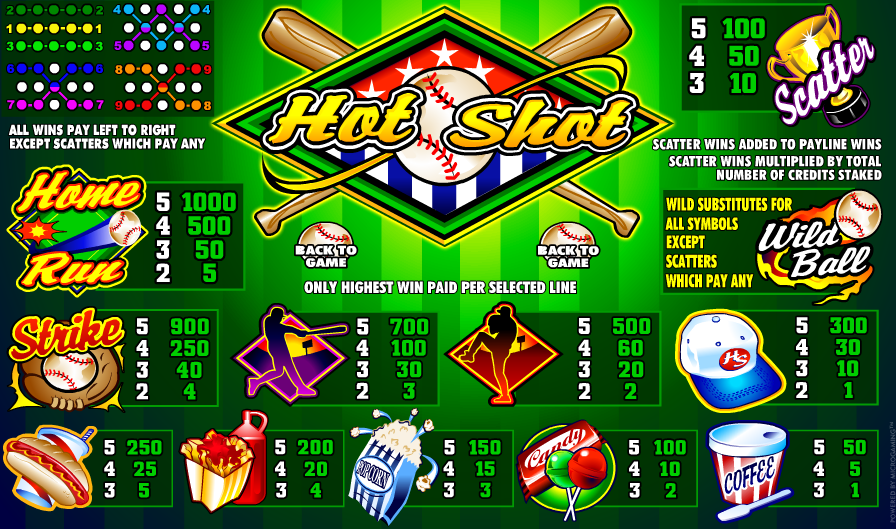 Hot Shot is the first online slot we’ve played and reviewed with baseball as it’s theme; we’ve seen plenty based on football, ice hockey and some quasi-sports such as darts and snooker but this mysterious sport is a first for us. Rumour has it it’s as boring and incomprehensible as cricket but hopefully the slot offers a little more excitement.

Hot Shot is a cheerful and colourful-looking game with five reels and nine paylines; two baseball bats shadow the reels to the left and right. There are no boring playing card symbols here, they’re all theme-related and include a coffee, some candy, popcorn, a hot dog, a baseball cap, a pitchers glove and a home run logo. There are also two silhouetted baseball players – a batter and a pitcher (apparently we know some terminology). The choice of symbols here suggests one or two reasons why America has an obesity problem.

There are also two special symbols featured here – the first is a trophy scatter and the second is a wild represented by a flaming baseball.

Unfortunately for those who appreciate a mini-game or some free spins, there’s nothing of the sort here and that’s a bit of a shame, especially for a five reel slot. This comes as come thing of a surprise when you land three trophy scatters on the reels and nothing happens.

Scatters do pay out money of course and there’s 100x your line bet available if you can land five anywhere on the reels; four will pay 50x and three will pay 10x.

You certainly get what you see here and that’s an admittedly colourful-looking and cheerful-sounding slot in which the reels spin and not much else happens. Occasionally you win a little bit of money but Hot Shot is more of an exercise in slowly depleting your bankroll while offering very little entertainment.