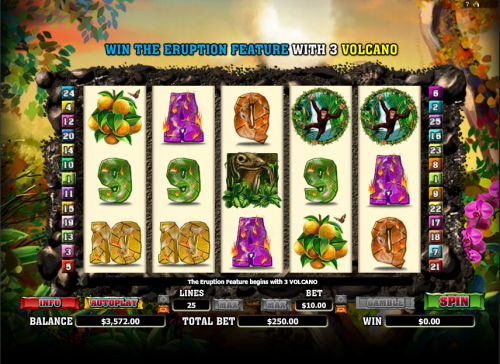 Hot Hot Volcano features five reels and twenty five paylines and the reels are set against a vine-covered rock face; smoke pours out of a distant fissure above the reels as the sun sets in the distance. Jungle sounds provide the background sound effects.
Erupting volcanoes are quite clearly hot but Hot Hot Volcano, the online slot developed by Microgaming is more than that – it’s ‘Hot Hot’, twice as hot as usual and filled with images of smoke and fire.  We seem to be on some sort of Jurassic Park-like island where dinosaurs roam the landscape and all living creatures look nervously at the smouldering mountain.

The main symbols are fruit, a monkey, a brightly coloured bird and a dinosaur of some sort; lower value symbols are 9, 10, J, Q, K and A of different colours carved out of rock.

There’s just the one special symbol in this game and that’s the erupting volcano wild which also activates the bonus feature.

As we mentioned above there’s just the one bonus symbol in this game and that’s the erupting volcano; it only appears on reels two, three and four and if you can manage to land them there on the same spin you’ll trigger this scorching feature.

The centre reel will became an expanding wild meaning that it covers all the spots on it’s reel. You’ll get five free spins and the expanding wild will remain in place for the duration of those spins.

Additionally the volcano will erupt and fling wilds around the reels on each spin to give you extra chances to land the big wins.

If you like an occasional flutter and as an slots fan you presumably do, you can gamble your most recent win by clicking the ‘Gamble’ button to the bottom right of the reels.

You’ll now get to play a game where you predict the colour of the next card drawn for a 2x multiplier or the correct suit for a 4x multiplier of your win.  As long as you win you can keep doubling up up to five times – as soon as you lose you’ll be heading back to reels.

Hot Hot Volcano is a fun slot with a nice bonus feature and quality graphics and we’ll certainly return to it in the future.