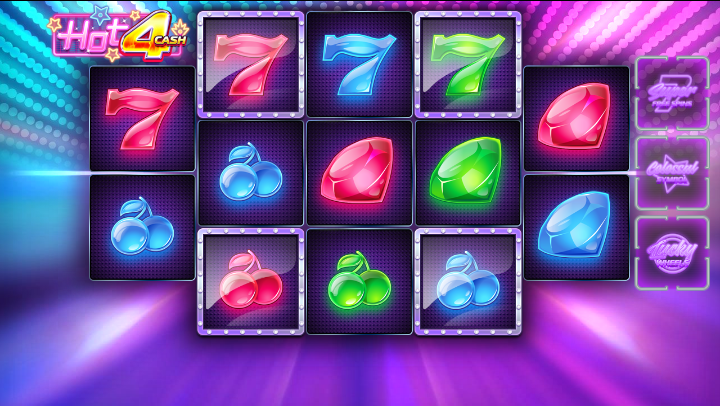 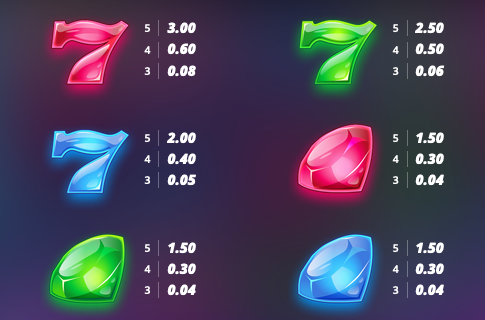 Hot 4 Cash may sound like the name of a high street Pawn shop but in this case it’s the title of a sparkling online slot machine from Nolimit City; spin the reels, match the symbols in the four hot zones and trigger one of three clever features.

Hot 4 Cash is a five reel slot with variable rows (as you can see from the screenshot above) and ten fixed paylines; the design is neon, colourful and accompanied by a pumping soundtrack to keep things ticking along.

Red, green and blue are the colours of this game and so the symbols follow along with sevens, gems and cherries in those shades.

The wild is a big, gold ‘Wild’ which can only appear on the middle position of reel three in the base game – not only will it replace all other symbols but it will also spread to cover up to four more positions horizontally and vertically.

The top and bottom positions of reels two and four are the Hot Zones and landing groups of similar symbols in these areas will trigger the following features:

Colossal Spin – land four of the same symbol in the Hot Zones and reels two to four will become one giant 3×3 symbol. Reels one and five will spin with the giant symbol acting as a wild for that symbol type.

Lucky Wheels – land four of the same colour symbols in the Hot Zones to spin the Lucky Wheels for a cash prize or an advance to the next level with better prizes up to 1000x the total stake.

Nolimit City make so really memorable slots and Hot 4 Cash is one more to add to the list – it’s good looks, energetic soundtrack and variety of cleverly triggered features make it one not to miss.