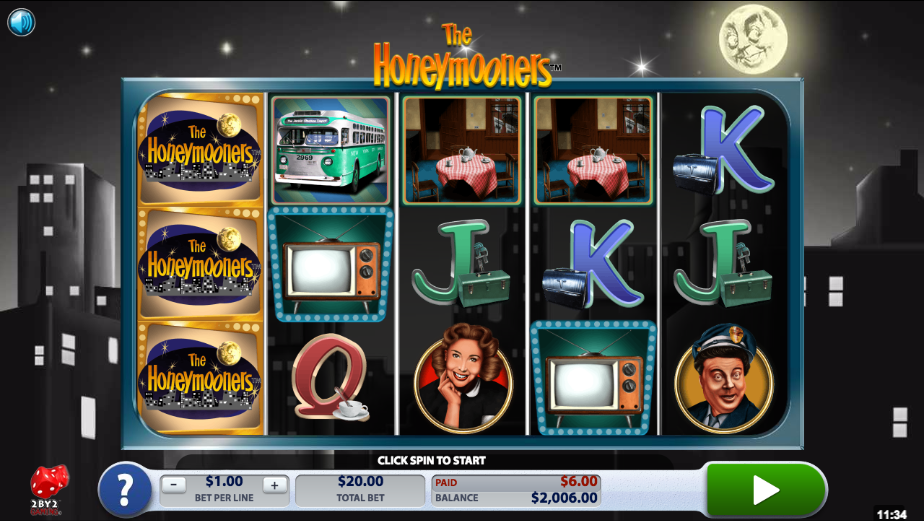 Written and starring Jackie Gleason, the Honeymooners is something of a cult TV sitcom which ran for a relatively short period between 1955 and 1956; fortunately for the online slots world there’s now a game based on this sitcom developed by 2By2 Gaming and you can read all about it right here.

The Honeymooners is a five reel slot with three rows and twenty fixed paylines; the symbols spin on brushed metal reels reminiscent of a television screen while in the background there’s a nighttime silhouette of the type of Brooklyn apartment building in which The Honeymooners lived.

The three higher value symbols are the three main characters – Ralph, Alice and Edward along with the famous kitchen table and the bus that Ralph drives; 10, J, Q, K and A are the lower values.

The Honeymooners logo is wild and appears only on reels one, three and five in the base game; it will substitute for all others to form winning combos except for the purple bonus icon and the television symbol.

This is triggered by landing two of the TV bonus symbols anywhere on reels two and four and you will now see one of five features randomly awarded:

Trigger this by landing three of the purple bonus icons anywhere on reels two, three and four; now choose between two free spins options as follows:

Neither option has the chance of retriggering any more spins.

It’s a bit tricky to recreate the atmosphere and sounds of a 1950s TV show but 2By2 Gaming have done this well and it’s an online slot which is well worth visiting with it’s multiple bonus features and high quality graphics – it comes with an RTP of 96.05%.